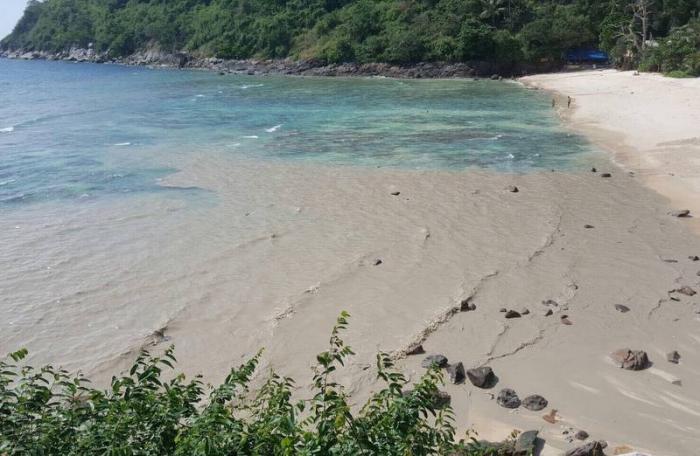 PHUKET: A building contractor, KMIT Construction, was let off with a warning for discharging murky brown rainwater onto Tri Trang Beach today.

Patong Municipality officials went on site to investigate the source of the brown water flowing directly onto the beach, following complaints regarding the issue by concerned local residents who may have thought it was bio-contaminated.

The locals told municipality officials that they believe the water originated from a construction site nearby.

“We have issued them a warning and told them to stop the flow of muddy water immediately, which is coming from a construction project” being undertaken in the area, Patong Mayor Chalermluck Kebsup told the Phuket Gazette.

After collecting samples of water in the bay and sending them to Bangkok for testing, officials concluded that this was a ‘normal’ occurrence caused by an annual algae bloom, not pollution (story here).

However, an engineering consultant for the Patong wastewater treatment plant, Phanuphong Wasasiri, told the Phuket Gazette that about 20 per cent of all the wastewater flowing from Patong did not actually reach the plant for treatment.

He added that infrastructure improvements were ‘being planned’ to rectify that, pending government approval of the required budget.

Drunk foreigner hits parked car and runs off into the woods