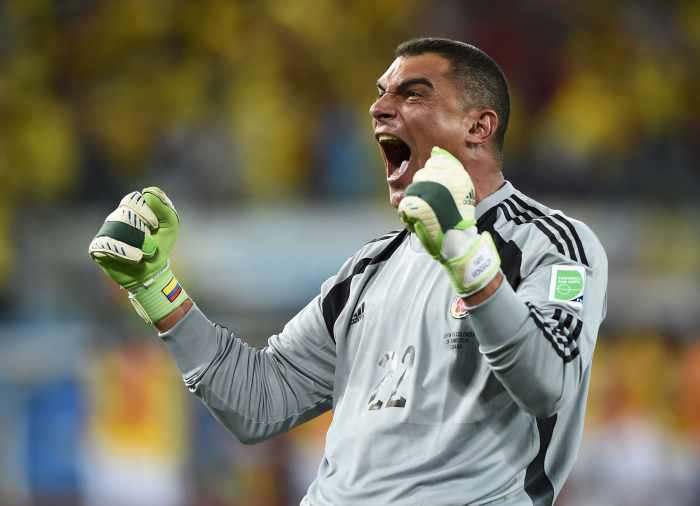 PHUKET: Colombia striker Jackson Martinez scored twice as they thrashed Japan 4-1 to maintain their 100 percent record and claim top spot in Group C on Tuesday to set up a mouthwatering second-round clash with Uruguay.

Colombia, who are in the last 16 for the first time since 1990 and had never before won three matches at the finals, went ahead through an early Juan Cuadrado penalty at the Pantanal arena.

Martinez struck twice in the second half and they could even afford to bring on 43-year-old goalkeeper Faryd Mondragon who became the oldest player to take the field at a World Cup.

Colombia substitute James Rodriguez wrapped up the win with a delightful fourth goal.

Japan equalised just before halftime with Shinji Okazaki’s fine diving header but fell apart near the end of the match.

“It was a difficult first half, we had lots of opportunities to score but found that their strong defence did a lot of damage,” said Martinez.

“In the second half, we were a lot better and were able to show the kind of play we had in previous games.

“I am really happy with the two goals,” added Martinez, playing in place of the rested Teofilo Gutierrez.

Greece beat the Ivory Coast 2-1 in the other game in the section to set up a last 16 clash with Costa Rica while Japan finished bottom of the group with one point.

The Japanese suffered their worst defeat at a World Cup since they lost by the same score against Brazil in 2006 in Germany but still contributed to an entertaining and exciting last match at the Cuiaba venue.

Colombia took the lead after 17 minutes when Adrian Ramos was brought down by centre back Yasuyuki Konno as he raced into the box on the left at the Pantanal arena.

Cuadrado, one of only three players retained by coach Jose Pekerman in a team with eight changes from the 2-1 win over Ivory Coast that secured Colombia’s second-round berth, scored to his right with Eiji Kawashima diving the other way.

Japan got a brilliant and well deserved equaliser on the stroke of halftime after enjoying 59 percent of possession in the first half and constantly probing Colombia’s reserve central defensive pairing of Carlos Valdes and Eder Alvarez Balanta.

Keisuke Honda sent a low, left footed cross in from the right corner of the box and Okazaki got in front of Valdes to steer a diving header past goalkeeper David Ospina just inside the near post.

With Colombia’s main marksman Radamel Falcao missing the tournament through injury and Teofilo Gutierrez rested, Martinez underlined Colombia’s depth of striking talent when he put them ahead again 10 minutes into the second half.

Right back Santiago Arias cut inside and passed to substitute midfielder Rodriguez who laid the ball off to his left from where Martinez shot home across the diving Kawashima.

Martinez got his second eight minutes from time on the counter-attack as Japan threw bodies forward looking for an equaliser.

Rodriguez then scored with a clever run and chip over Kawashima to complete the rout with his third goal of the tournament in the dying minutes.

Asked about facing Uruguay, Martinez said: “It’s going to be a really tough game, a fight, and we just have to maintain our focus and continue to work like we have.”

Japan should have scored a second equaliser in the 66th minute but striker Yoshito Okubo blasted right back Atsuto Uchida’s cross over the bar from right in front of goal with Ospina at his mercy.

The Japanese enjoyed more possession but were overcome by the power of the counter-attacks unleashed by Colombia who missed several other chances.

Pekerman sent Mondragon on for the final five minutes, allowing the veteran of the 1994 and 1998 finals to make a last mark on the event as the oldest man to play in a World Cup.

Mondragon surpassed Cameroon’s Roger Milla, who played at the age of 42 in the 1994 World Cup in the United States, and made a fine block in stoppage time to keep out a point-blank effort by Japan substitute Yoichiro Kakitani.

The match ended with fans that packed the stadium chanting the names of their heroes Martinez, Rodriguez and Mondragon.