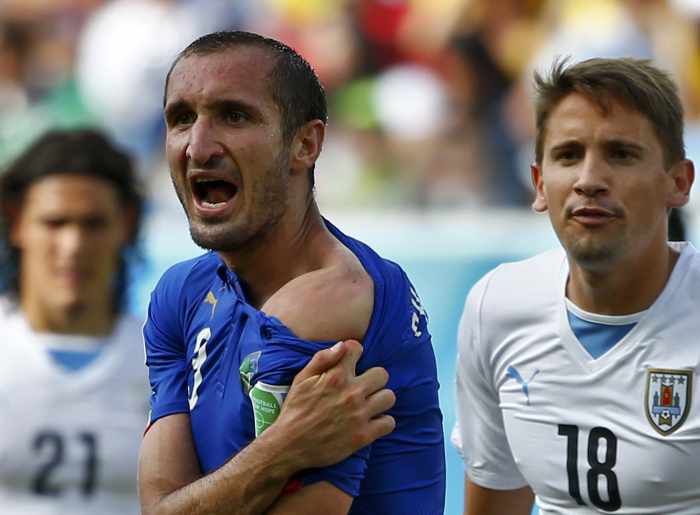 PHUKET: Uruguay striker Luis Suarez looks almost certain to be banned from the World Cup for the second successive tournament after he bit Italy’s Giorgio Chiellini on the shoulder during his team’s 1-0 win on Tuesday.

FIFA is investigating the incident which has become a worldwide talking point and Suarez, twice previously banned for biting, looks likely to be hit with another lengthy suspension despite escaping punishment during the match.

“We are awaiting the official match reports and will gather all the necessary elements in order to evaluate the matter,” a FIFA spokesperson said.

Suarez and Chiellini clashed in the Italian penalty area 10 minutes from the end of the match which sealed Uruguay’s progression and Italy’s elimination from the tournament.

Chiellini furiously pulled open his shirt to show the mark to the referee.

Reuters photographs show what appeared to be bite marks on his shoulder and pictures also showed Suarez sitting on the ground holding his teeth immediately after the incident.

The Italians were still complaining about it when Uruguay’s Diego Godin scored with an 81st-minute header to secure a 1-0 win that sent them into the second round and eliminated Italy.

“It was ridiculous not to send Suarez off,” Chiellini told Rai TV.

“It is clear, clear-cut and then there was the obvious dive afterwards because he knew very well that he did something that he shouldn’t have done.”

Suarez said the incident was just part of the rough and tumble of the game.

“Those are situations that happen on the pitch. We were both just there inside the area. He shoved me with his shoulder, and my eye got left like that also,” he said in reference to Chiellini’s mark.

Uruguay coach Oscar Tabarez did not see it.

“I’d like to see the images,” he told a news conference.

“I didn’t see that. And if it happened the referee probably didn’t see it. So no I don’t have any more comments to make. We had more important things than this in a football match.”

Liverpool’s Suarez was banned for 10 games last year after biting Chelsea’s Branislav Ivanovic in a Premier League match and in 2010 he was suspended for seven games for biting PSV Eindhoven’s Otman Bakkal while playing for Ajax Amsterdam.

He missed Uruguay’s World Cup semi-final against the Netherlands four years ago after being sent for a handball on the line that denied Ghana what would have been a match-winning goal in the final minute of extra time in a quarter-final match.

He was sent off for that incident and although he was not cautioned by the referee on Tuesday, FIFA’s rules allow the use of video or “any other evidence” to retrospectively punish players.

FIFA’s disciplinary code sets a maximum ban of 24 matches or two years, but the longest suspension FIFA has imposed for an offence in the World Cup was eight games for Italy’s Mauro Tassotti for breaking Spain’s Luis Enrique’s nose in 1994 with an elbow.

Uruguay could potentially play four more games in the tournament and it would be a surprise if Suarez were to be given a ban of a shorter duration.

“I have watched the incident several times on television,” FIFA executive committee member Jim Boyce told Reuters. “There is no doubt Luis Suarez is a fantastic footballer but once again his actions have left him open to severe criticism.

“FIFA must investigate the incident seriously and take whatever disciplinary action is deemed necessary.” Another FIFA executive committee member, Michel D’Hooghe of Belgium, who is also the head of FIFA’s medical committee, told reporters he had not seen the incident.

“We would await a medical report if it was deemed necessary given the nature of the incident,” he said.

“But whatever, it is very, very sad for everybody who loves football.”

His latest indiscretion sent the world’s social media into meltdown and within minutes of the match ending #Suarez was the top trending hash tag on Twitter.

A tweet from former Liverpool striker Michael Owen was typical of a wave of reaction from former players and pundits: “Tell me I’m seeing things. Surely Suarez didn’t bite someone again?,” he wrote.

“I’m genuinely gutted. I love watching him play more than any other player but he obviously can’t control himself.”

Suarez, England’s Footballer of the Year, scored both goals in Uruguay’s 2-1 victory over England having missed the opening match against Costa Rica as he recovered from knee surgery and until the incident had kept control of his temper during a bruising game.

Italy, who needed only a draw to progress, looked comfortable until they had Claudio Marchisio sent off for a foul on Egidio Arevalo Rios after an hour.