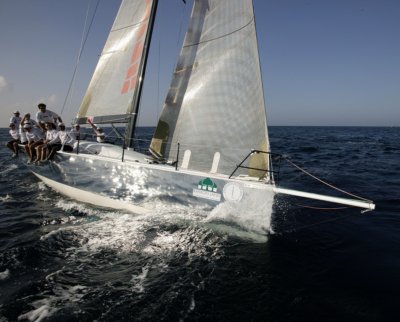 PHUKET: After yesterday’s passage race around the islands, the sailors got down to the serious business of racing on multiple windward/leeward courses. Once again it was an idyllic day for sailing with gusts of 15 to 20 knots of northeasterly breeze fanning the boats along under clear blue skies.

Several collisions on the course saw a huge attrition rate in the Firefly class, with four boats retiring, a hole in the start boat, at least four spinnakers shredded, the photo boat crew shaken up and a sailor rushed to Phuket International Hospital.

Judging by the crowd of sailors outside of the jury room and the delay in posting results, the arguments will rage long into the night. Despite all the carnage to the boats, the results will eventually see a pattern emerging in each class, which could dictate how the rest of the regatta evolves.

In the Racing class, despite media speculation that Jelik does not like windward/leeward races, Frank Pong took his 75-footer around the course in record time and won Race 2 line and handicap honors.

In the Premier Cruising class, David Ross’s newly refitted Swan 53 Frangipani Girl was worth every penny as they raised their game and won Races 2 and 3 to shoot to the top of the leaderboard. Two second places for Geoff Hill’s Strewth has them trailing Frangipani Girl by one point. Two third places for Peter Cremer’s Shahtoosh has them edging out Jon Wardill’s Australian Maid for third place overall.

In the Firefly one-design class, Henry Kaye was hell bent on making up for Mamba‘s retirement yesterday and went on to secure victory in Races 2 and 3 today. A collision between Bill Phelps’ Twin Sharks and Peter Dyers’ SEA Properties saw their regatta come to an early conclusion.

Roger Kingdon’s Moto Inzi had an incident with the press boat and Chris Jongerius’s The Frog retired with damage. This left Pierre Forsans’ Pagatoon and David Hill’s Voodoo Child to trade second and third places.

Jeff Davidson’s Mumm 30 Panic clambered back into the running in IRC 1 with first and second places today. Sail in Asia’s Farr 43 Switchblade has three owners from the Irish Green Team for the Commodore’s Cup on board who helped them take first place in Race 3 and keep them amongst the class leaders.

All positions are provisional and based on the constantly changing results at the time of going to press.