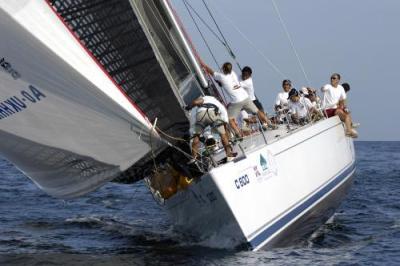 PHUKET: Clear blue skies and 8 to 10 knots of northeasterly breeze greeted the sailors on Day One of racing. Some may have been a little late arriving at the starting area, especially after dancing the night away at last night’s welcoming party at the Kata Beach Resort.

The race officers selected passage courses that took the fleet around the southern tip of Phuket and beat up the east coast to round either Koh Hei, Koh Aeo or the Safe Water Mark into Phuket Harbor before returning on a long downwind slide and reaching to the finish off Kata beach.

Freshening breezes on the east coast had the racing boats making quick work of the course and most boats finished by 3 pm.

Unfortunately for the slower cruising classes, the breeze died out in the afternoon leaving them to struggle for the finish line.

In the Racing Class, Frank Pong’s 75-foot Jelik enjoyed a long beat to windward and even more the long downwind slide to cover the 31-mile course in 3 hours and 25 minutes. This earned them a resounding first and fastest in race 1 and a good confidence boost early in the regatta.

The Fred Kinmonth/Nick Burns Mills 51 Fortis Mandrake followed 36 minutes latter to clinch second place in front of a fast finishing Ray Roberts on Quantum Racing slightly over a minute behind on corrected time.

Unable to compete today was Stephen Reith’s Sydney 40 Foxy Lady III, which drifted off during the night and was found this morning five miles offshore by the Royal Thai Navy.

Scott Duncanson’s Phuket 8, renamed Raimon Land, left the rest of the Sportsboat fleet in their wake. Finishing 38 minutes in front of the next boat gave them first and fastest plus a good start to the regatta. Not to be out done Kevin Scott’s The Weasel was the best of the Platu 25s to score second place. Japan’s Keisuke Nagamatsu on Platu 114 followed close behind to fill third place.

Pena Trungkabunchar’s Lawana was provisionally awarded the win in the Premier Cruising class. A protest was lodged that they did not sail the correct course which would result in Jon Wardill’s second-placed Australian Maid being elevated to first place.

Despite winning many other regional regattas Peter Cremer’s Shahtoosh first attempt at the King’s Cup has resulted in third place. A last-minute reprieve for Geoff Hill’s Strewth to stay in the Premier class gave them fourth place, which may improve if the protest is upheld.

In the Firefly One design class, Bill Phelps on Twin Sharks was quick off the start line and established a handy lead by the first mark. Closely followed by Chris Jongerius on The Frog. Henry Kaye’s Mamba and Roger Kingdon’s Moto Inzi had there work cut out but got down to it and by the time they reached Koh Hei they had closed the gap on the leaders.

After multiple gybes down the long back strait and reaching to the finish it was Henry Kaye’s Mamba that crossed the line first, but for technical reasons choose to withdraw from the race.

In IRC 1, Steve Manning had the pedal to the metal on his new Beneteau 44.7 Walawala to secure first place. Sail in Asia’s Farr 43 Switchblade had a good run amongst the leaders to slot into second place after missing out on first place by a mere 14 seconds. Bill Hamlen’s suspiciously named Tropical Beaver stayed on the pace to finish third and keep the Beneteau designs amongst the front runners.

In IRC 2, Peter Dyer’s Madame Butterfly continued their winning ways to score first place and start the regatta where they finished off last year. Stuart Williamson’s brand-new Beneteau 34.7 Skandia has quickly established a place at the top of the order with second place today.

Fresh from a win at the Raja Muda Regatta two weeks ago Hellmut Schutte’s Elan 340 Aquavit IV managed to squeeze into third spot as the breeze died out on the reach to the finish.

Having won several King’s Cups before Khun Radab’s Cedar Swan got their 2007 campaign off to a good start with first place in the Multihull Racing class. Tim Milner’s Seekronghuk scorched around the course with the leaders to hold onto second place. Dave Wales’ much smaller Corsair trimaran The Sting put in a good performance to finish third.

All positions are provisional and based on the results at the time of going to press.