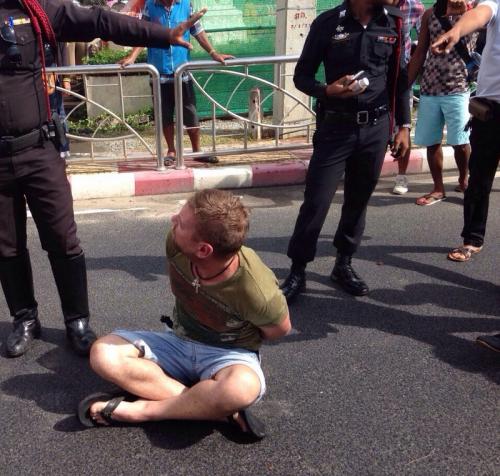 PHUKET: An Australian allegedly working illegally as a taxi driver in Patong attempted to intimidate a female taxi driver yesterday afternoon with a bladed weapon and a gun.

Garry Porting was arrested later in the day by Patong Police for illegal possession of a firearm and ammunition, explained Kathu District Chief Veera Kerdsirimongkol.

Mr Porting went to the Graceland Hotel and Spa in Patong to pick up a foreign guest who wanted to go to Tiger Kingdom at about 9am yesterday, said Mr Veera.

“While waiting for the guest at the hotel, Mr Porting got into an argument with a female taxi driver stationed there, who told him he could not work as a taxi driver and accused him of being a timeshare tout,” Mr Veera told the Phuket Gazette.

After returning his customer to the hotel, Mr Porting allegedly drove his car around searching for the woman he had argued with in the morning.

“At about 3pm he saw the woman back at the taxi station, pulled his car over and got out. He approached her wielding a bladed weapon. When he noticed that she was backed by other taxi drivers, he returned to his car and got the gun and rubber bullets. He started to approach the group, but people were shouting and yelling for police, so he ran away and drove off,” Mr Veera explained.

Patong police arrested Mr Porting not far from the hotel shortly after the incident.