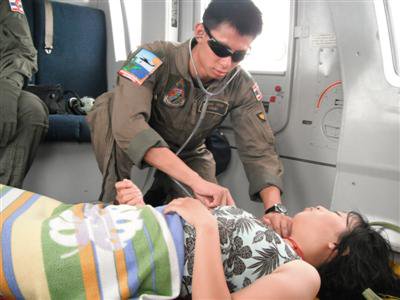 PHUKET: A Chinese woman is fighting for her life at Vachira Phuket Hospital after a dramatic airlift rescue from Surin Island National Park this afternoon.

Lt Cdr Somsak Boonkam of the Naval Air Section, Third Area Command (NASTAC), told the Phuket Gazette that he was among the five rescuers dispatched on the mission.

“At about noon we received radio orders to conduct an emergency medical evacuation of a tourist from the Surin Islands. She had already been given first aid by security personnel on the island when we arrived,” he said.

The tourist, 26-year-old Zouxin Jie, was traveling alone when she joined a group tour to the remote islands, which offer some of the best snorkeling sites in Thai waters.

Unable to use the island helipad, the rescue team hoisted Ms Zouxin into the aircraft from a stone formation at the shoreline.

After the helicopter returned to the navy base at Cape Panwa she was rushed to Vachira Phuket Hospital by ambulance.

Ms Zouxin apparently had water enter her lungs during a dive trip. There were no wounds on her body, he said.

“She appeared to show signs of consciousness during the return trip, but she was unable to move or talk,” he added.