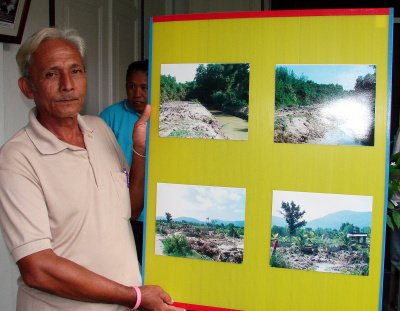 PHUKET: Out of fear of losing their community and way of life to “selfish people” allegedly encroaching on protected mangrove forests, Pa Khlok villagers submitted a formal complaint to the Phuket governor yesterday.

The land in question is between the Phuket Home for the Elderly and the Phuket Airpark.

It is currently in the process of being transferred from protected forest department land to “community forest”, which would allow local villagers to collectively manage and use the land for their benefit.

This transition would delegate land preservation responsibilities to the local community while simultaneously allowing them to benefit from having access to it.

However, it appears someone is trying to beat the villagers to the punch.

They claim that intruders have been clearing the land, little-by-little, and planting coconut trees to convert the area to agricultural land to be sold in the future.

Mr Cha-euan said, “This forest should be under the care of local villagers soon, but we are afraid that property development rapidly approaching our area will encourage some selfish people to illegally reserve the land for themselves and then sell it off to developers”.

The villagers filed a complaint regarding the encroachment at the Thalang District Office on September 18 last year, but no progress has been made, he said.

“Our fishing life will be affected for sure if we don’t stop this encroachment,” Mr Jurun added. “So, I would like to beg Governor Tri to give us a hand very soon.”

Mr Jurun is brother to Jurin Ratchapol, a well-known local environmental activist gunned down in a Pa Khlok forest in 2001.

Mr Jurin was one of about 100 Pa Khlok villagers who protested alleged encroachment by a prawn farm owner.