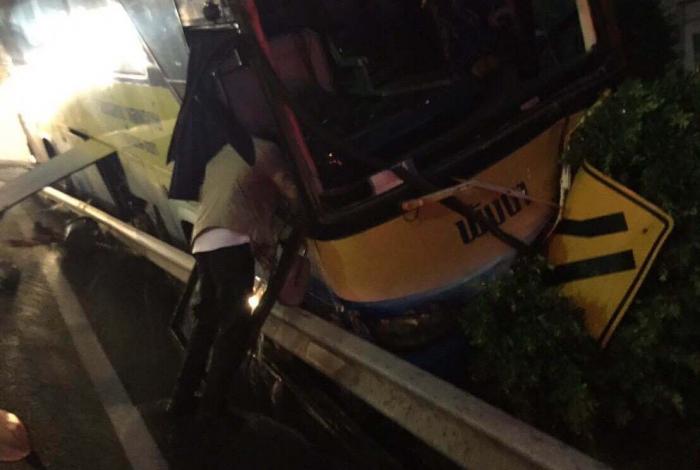 PHUKET: One man was injured when a bus loaded with Chinese tourists broke through a roadside barrier and veered off the road on Patong Hill yesterday evening.

“We received reports from locals that a bus had crashed in front of the Sea Pearl Hotel,” confirmed Patong Police Lt Jongserm Preecha.

“The driver, Tairong Chutai, 30, was returning 25 Chinese tourists to their hotel in Patong after a trip to Phang Nga. He claims to have ‘lost control of the brakes’ on the way down the hill. The driver said he attempted to slow down by the roadside, but ended up crashing into a barrier.”

The injured passenger was named as Sun Lie, 31. He suffered minor head injuries and was taken to Patong Hospital for treatment. He was discharged later that night.

“The rest of the tourists were alarmed, but unhurt,” said Col Jongserm. “The driver was tested for alcohol, but the test came back negative. Further investigations are underway.”

The incident marks the second bus crash in Patong in two days. Five tourists, including a five-year-old boy, were injured when a bus flipped at the bottom of Patong Hill on Saturday (story here).