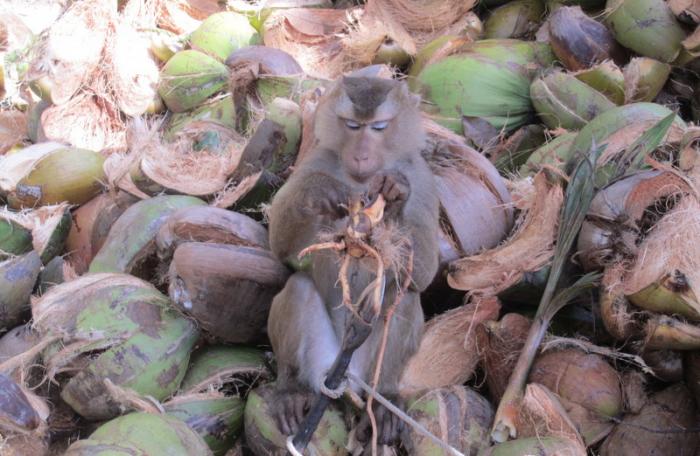 PHUKET: Pom, an eight-year-old unemployed monkey raised by a Bang Jo couple since he was two, has been let go because the family who owned him could not bear to see him depressed.

Pom used to work as a coconut picker and also helped to peel coconuts at his owner’s coconut oil factory. A few months ago, coconut prices shot up and the owners could not afford to buy coconuts for their business.

“We used to buy mature coconuts at 5-7 baht each for years. This year, prices increased to 15-20 baht each. However, we had to keep selling coconut oil at the same price, about 300 baht per kilogram. So I decided to stop producing coconut oil a few months ago, said 61-year-old Safia Manabutra, who raised Pom after buying him for 8,000 baht.

“This year we faced a coconut crisis, so not many coconuts were grown and nobody hired us to gather them. My main job is working in the rubber plantations; making coconut oil was an additional source of income for us. During the rainy season, even the income from rubber plantations has been limited, explained Ms Safia.

“Pom got along better with my husband, Hem Manabutra, who was the only one able to command him. We loved him and shared a bond with him. I believe he understood us when we talked to him. However, he was not really good with strangers.”

Pom was fed three meals a day, usually rice mixed with bananas or other fruits. He loved drinking milk, Ovaltine and juice, explained Ms Safia. He was trained to pick coconuts by his former owner.

“We could not afford to send him to a monkey training school in Surat Thani, which costs about 10,000 baht,” she said.

Pom performed his duties from 8am to midday, after which he had a rest.

“Sometimes we took him shopping with us, so he could enjoy the change of scenery and see new people,” said Ms Safia.

She added that Pom had to be tied at all times, otherwise he would escape.

“If he ran loose, villagers would be scared of him or hurt him, maybe even kill him. It is very normal in the south to have monkeys working in plantations. My husband is old and cannot exert himself anymore. It was good to have Pom around to help us pick coconuts so we could earn a little extra income,” said Ms Safia.

“I do not think this counts as abuse, as he lived in an open area, never in a cage. I feel more pity for animals in the zoo,” she said. “We fed him, kept him clean and treated him as a part of our family,” Ms Safia added.

“I left Pom in the care of the Livestock Office. I hope he is happy and able to find food for himself, as he was raised by humans since he was a baby.”

On Deck: Large trimarans to the fore