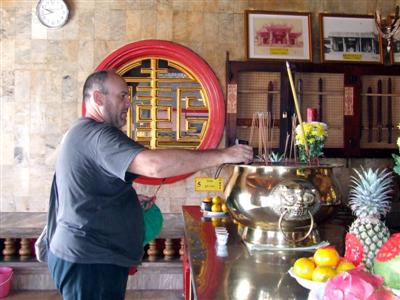 PHUKET: Phuket is reaping the rewards of a huge surge in tourists for this year’s Chinese New Year.

The Tourism Authority of Thailand (TAT) expects revenue generated over the festival period to top the eight-billion-baht mark nationwide, from both domestic and foreign markets.

Reports from around the island point to occupancy rates hitting 90 percent in the three and four-star hotels.

Similar reports are coming in from Koh Samui.

“This has helped boost occupancy rates for the three and four-star hotels during the month to an average of 85 to 90 per cent.”

During the period each year, hotels in Phuket Town get a surge in occupancy, says Duangduan Vichit, reservations officer at the Phuket Merlin Hotel.

“Currently, the Phuket Merlin is fully booked, with around 80 per cent of the guests being Chinese holiday makers.

“There is also a significant number of domestic tourists who stay in Phuket Town, but not as many as foreign tourists,” she said.

Ms Duangduan added that Phuket Town is a popular tourist attraction for Chinese tourists, who prefer to stay there during the New Year festivities because of the town’s cultural charms, which make for a good atmosphere during the festival.

Phuket Town is also home to many important Chinese shrines which attract Chinese tourists and locals.

He added that there were 120 chartered flights due to land at Thai airports during February.

Out of this number, as many as 80 will be landing at Phuket International Airport, in addition to the regular flights operating between China and Thailand.