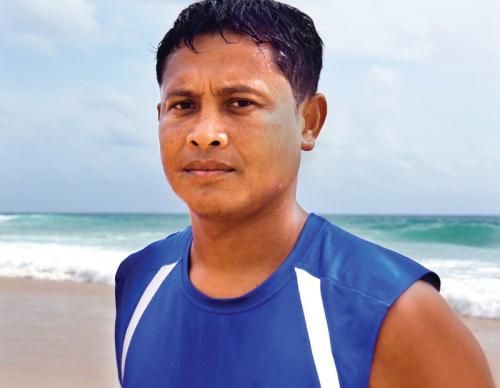 Phang Nga native Uten Singsom, 37, has been working as a lifeguard for 14 years, first at Le Meridien Phuket Beach Resort in Patong and for the past three years on Karon Beach. Today, he is the head of the Kata-Karon Lifeguard Club. Here he talks about what government and hotels should do to make Phuket beaches safer and stop tourists from drowning.

PHUKET: It should be illegal to swim when red flags are posted, and hotels should warn their guests clearly about the dangers of the sea during the low season.

When there is dangerous surf, we post red flags along the beach to warn swimmers, but many of them ignore the flags. Many times when we try to stop them from going into the sea when it is dangerous, they swear at us. Sometimes they even hit my staff.

Hotels and resorts should post signs in their lobbies or hotel rooms to warn guests not to swim during the southwest monsoon. I suggested this idea to some hotels, but most of them disagreed. They worried it would chase their guests away.

I understand that they’re looking at it from a business point of view – and I also understand that a big dream of many tourists who visit Phuket is to swim at our beautiful beaches. But as a lifeguard, I would say that if they come here to die, it’s better not to come.

We don’t have the authority to stop people from going into the water. We need help with this. We have enough stress in our job without having to fight with people who won’t listen to us.

We’re under incredible pressure when we rescue swimmers. I always try my best to save them. Even when they disappear in the water, I feel I have to find them. Whether they are alive or dead, I will not leave them in the water. If they die at sea, I want to at least return their body to the shore.

About two years ago, I rescued a German man by pulling him out of a rip current. It was scary and I almost died.

My friend and I took a jet-ski out to rescue him. The waves were really strong. As we arrived near him, I jumped off the jet-ski and stuck the rescue float under his chest. I tried pulling him out of the strong waves in a safer direction.

He was big and heavy and had been hit so many times by the waves before I got to him that he was exhausted and about to pass out. I asked him to help me swim and tried to go under the waves with him to avoid being hit, but he was too scared and too tired. I had to pull him all the way with my own strength.

The waves hit me again and again and pulled him and me in the wrong direction. I was choking on sea water and felt exhausted. I felt like I couldn’t hold on anymore.

At that moment, I even thought about leaving him and swimming away alone, but a voice in my head told me to try again and I finally made it.

After we got out of the rip current, my friend picked us both up with the jet-ski and took us safely back to shore.

In some cases, after getting people back to shore, I have to do CPR. This part is also stressful because their lives are in my hands. I really want to save them, I want them to survive.

Sometimes as I am about to do CPR, a family member of the person I pulled out of the water comes and says to me tearfully, “Please save my son. Please do not let him die.” That puts more pressure on me and makes me very sad if finally I can’t save the person.

The last time I did CPR was on June 23, on an Indian tourist named Ramesh Chand Singhal, who was pronounced dead on arrival at Patong Hospital. That day I went home feeling so depressed.

We do everything in our power to help swimmers in trouble. We would like the authorities to keep them from getting in the water in the first place, when the surf is dangerous.