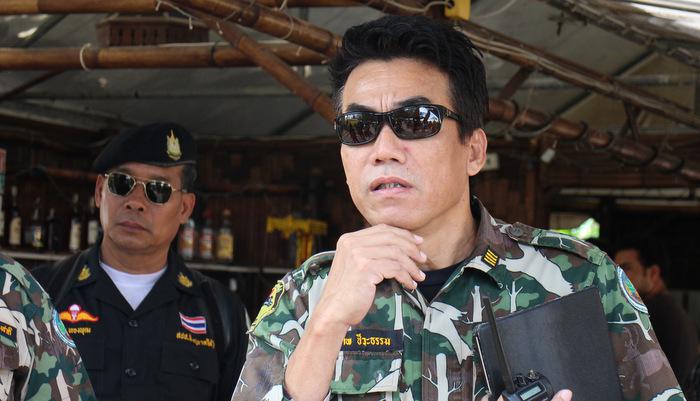 PHUKET: As his last major act as chief of Sirinath National Park, Cheewapap Cheewatham this morning led 50 officers on raids of businesses deemed to be illegally built on national park land near Nai Thon Beach.

“Seven new shops – six on the beach, one on the beachfront road – have been built without permission from Sirinath National Park and Sakoo Municipality,” Chief Cheewapap explained.

A total of 14 businesses have been granted permission to operate at the prime location on the condition that each business have no more than 12 tables and that no permanent structures are built.

Those 14 businesses have fully complied with their permits, Mr Cheewapap said.

“However, these seven new businesses have installed large buildings at the site, including toilets that connect directly to the sea. They are certainly illegal,” Mr Cheewapap said.

“The owners have 90 days to remove their belongings. After that, DNP [Department of National Parks Wildlife and Plant Conservation] officers will return and seize all properties found to be illegally on government land,” Mr Cheewapap said.

Complaints against all seven operators will be filed with the police for further action, he added.

“We will fight every case of encroachment to make sure we get all of Sirinath National Park back,” Mr Samak said.

“Even if business owners claim they have title deeds for the land where their businesses are located, we know that some corrupt government officials have been involved in illegally issuing land titles in the past. All such titles remain illegal.”

Mr Samak said that a total of 1,755 rai of Sirinath National Park has been encroached on.

“The raids today accounted for 185 rai, and the court has already ordered 500 rai of illegally occupied land to be vacated and returned to the park,” he said.

“The remaining land under encroachment is under legal process.”

Mr Cheewapap confirmed that he will present himself to the Royal Forest Department in Bangkok to start work on Thursday.

“I will oversee efforts to protect national parks throughout all of Thailand, while Director Samak will personally oversee the investigations into national park encroachment in Phuket, Phang Nga and Krabi,” he said.

“But that doesn’t mean I will no longer be looking into problems specifically in Phuket… Actually, I will be able to investigate encroachment and illegal logging in the Nakkerd Hills and Kamala Hills.”

Mr Cheewapap called on his successor, Kitiphat Tharapiban (story here), from Mae Ping National Park in Chiang Mai, to resist the temptation of lucrative bribes in his new post.

“I refused bribes from many people who offered me huge amounts of money to illegally build on park land. I hope the next chief does the same,” Chief Cheewapap said.

“To best protect Sirinath National Park, the new chief will need to have integrity, intelligence and courage to resist graft. He will also need to be clever enough to know which land is legal or illegal, and be brave enough to arrest all the bad people.”

Phuket Governor off island to report to army base