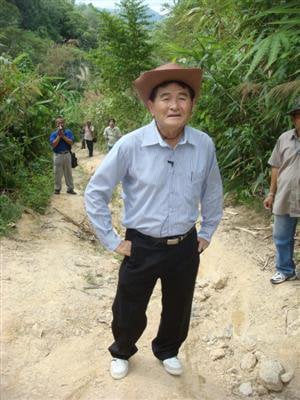 PHUKET CITY: A new road linking Chalong and Patong will reduce accidents, save fuel and result in the destruction of fewer trees than detractors believe, the Phuket governor said on Monday.

Phuket Governor Wichai Phraisa-ngop was addressing a meeting at Provincial Hall to discuss progress on the controversial project, a key part of his plan to improve Phuket’s road network.

There are three possible routes to complete the road, all of which have already been partially cleared, Gov Wichai told the meeting.

“They’re all pathways,” he said. “Whichever route we choose to develop, there won’t be many trees cut down.”

Lower stretches of the road on the Chalong side pass through the entrance of Luang Pu Supha Temple.

The same valley is also already home to a golf course and is slated to become the location of the island’s third reservoir, the 5.7-million-cubic-meter Klong Krata basin.

The 4.6-kilometer route would reduce the island’s fuel consumption to the tune of an estimated one million baht per day, the governor estimated.

Currently, a road trip from Chalong to Patong road is around 20 kilometers long.

The new road would reduce traffic and accidents along Patak and Phra Barami roads, the two existing access roads to Patong that are both ‘quite dangerous’, according to Gov Wichai.

However, the project still needs Cabinet approval to go ahead.

Gov Wichai said Cabinet had asked that the project’s environmental impact assessment (EIA) be revised before the project can get started.

The road is legally problematic because parts at the highest elevations need to pass through national forest land, much of which is above the 80-meter building limit put in place in 1994 to prevent erosion, encroachment and flooding.

Once the EIA revision is completed in about one month’s time, Cabinet backing is expected to follow within two months, Gov Wichai said.

“Once the project gets a Cabinet resolution, I am sure the construction could be finished within nine months,” he said.

Twenty-six million baht in funding for the project would come from the government’s 100-billion-baht Thai Khem Kheng (strong Thailand) stimulus package for 2012.

Another 14 million baht would be provided by Patong Municipality and Chalong Tambon Administration Organization (TAO).

Yesterday’s meeting was attended by Department of Rural Roads Region 18 Director Chock Nualdaisri, who has responsibility for the project, as well as Chalong TAO President Nattapong Wimolphan and representatives from the Patong Public Works division.

Patong Municipality is also conducting a controversial 40-million-baht feasibility study into the feasibility of boring a tunnel under Patong Hill to create another new route to Patong.