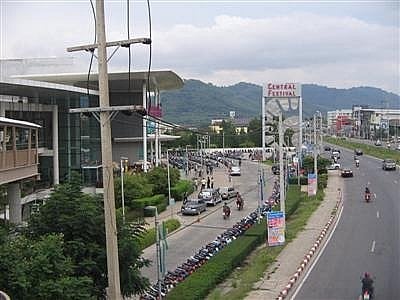 PHUKET: Central Retail Corporation (CRC) has announced a .5 billion baht facelift of the Central Festival Phuket shopping mall that will include the opening of its fourth floor.

The renovation, the first since the complex opened in September 2004, will be completed by the beginning of next year. It is intended to cash in on the recovery of the Phuket tourism industry and high growth projections in the retail sector throughout Thailand.

About 150 million will be spent by 300 retail tenants to renovate their stores in the complex.

The country’s retail industry anticipates growth of between 7% and 8% this year, the highest in the past five years, said Thanapon Tangkananan.

Growth in the retail sector has been driven mainly by strong domestic consumption and exports, as well as good prices for agricultural products, he said.

Phuket alone attracted more than 7 million foreign tourists annually, which is half the total number of foreign visitors to Thailand, he said.

“Despite some negative factors, such as the political unrest that hit Bangkok earlier this year, the number of foreign tourists visiting Phuket has recovered very quickly,” Mr Thanapon said.

He estimated the growth at about 20% year-on-year.

Central Festival Phuket will be relaunched in February as “The South’s Best International Lifestyle and Shopping Destination”.

The repositioning is intended to attract higher numbers of foreign tourists, mainly from Russia, China including Hong Kong, South Korea, and Europe.

“The renovation will increase total retail space of the shopping mall from 40,000 square meters to 53,000sqm,” he said.

Much of this expansion will come when the fourth floor is finally opened after going unused for over six years. The new fourth floor, to be promoted as a health and beauty zone and will be occupied by 20 shops with total retail space of more than 4,500sqm.

The number of tenant stores at Central Festival Phuket has increased by 15%, with 30-40 new outlets opening when the renovation is completed.

With the renovation the company expects to increase shopper traffic at Central Festival Phuket by 20% to 25%. The mall now attracts between 10,000 and 15,000 shoppers a day, of whom 40% are foreign tourists, Mr Lertvit said.

Wilaiporn Pitimanaaree, general manager of Central Festival Phuket, said sales by its retail tenants increased by between 12% and 15% year-on-year in the first 10 months.

The mall itself expects overall sales to grow by more than 20% during the last two months, driven by the holiday season and the arrival of the high season for tourism.

Foreign tourists spend twice as much per visit as local shoppers, she said.