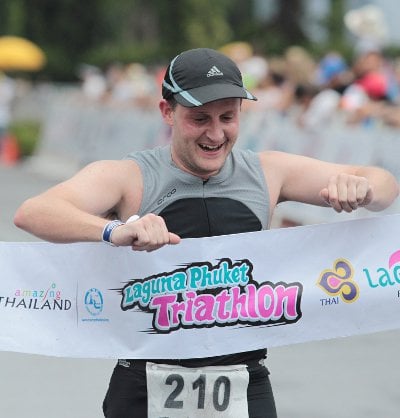 PHUKET: It was a big day of former champions at the 2010 Laguna Phuket Triathlon yesterday, as Italian Massimo Cigana and Australian Belinda Granger took top honors.

The pair were in dominant form in their respective races, crossing the finish line well ahead of the chasing pack, which included a host of top professional athletes and more than 800 amateurs from 33 countries.

The top Thai finisher was Pasayos Yongsakulchai, who completed the course in 03:05:54.

The top female Thai finisher was Mayuree Maidaeng, who finished in 03:21:40.

Cigana and Granger are no strangers to the winners’ podium at the Phuket Laguna Triathlon. Cigana was men’s champion in 2007, while Granger clinched the 2008 women’s crown.

The Italian’s performance is all the more exceptional when you take into account he only returned to training 10 days ago following six weeks off with a foot injury.

Cheered on by a sizable Italian support contingent, Cigana was well in contention after the 1.8-kilometer swim. He then took complete control of the event during the 55km cycle, racing ahead of the other competitors and finishing the 12km road run strongly to claim the title.

Speaking after his win, the 17th Laguna Triathlon champion was quick to praise the event.

“The rain meant that I had to be careful on the bike course, but I’m still very happy with my time. This is always an amazing race and the prospect of the Ironman 70.3 Asia-Pacific Championship next weekend makes it a really special atmosphere in Phuket. It was fantastic to return to winning ways here in Phuket,” he said.

“I’m absolutely delighted. This is by far my favorite race in the world and to win it again is just fantastic,” she said.

Granger had to see off the strong challenge of Great Britain’s Emma Ruth Smith, who had to settle for second place, while two-time former winner Samantha McGlone of Canada finished third.

Granger’s winning time of 02:55:08 was nearly five minutes ahead of second-placed Smith.

Australian Clinton Mackevicius created a record for the Laguna Phuket Triathlon by becoming the first amateur athlete to finish in the top three overall, with a time of 02:44:57.

Most of the professional athletes that competed at the Phuket Laguna Triathlon will remain on the island this week in preparation for the inaugural Ironman 70.3 Asia-Pacific Championship taking place this Sunday at the Laguna Phuket Resort.

Ironman is triathlon’s ultimate challenge – the single day endurance test consisting of a 3.8km swim, a 180km cycle and a 42.2km run.

BIS touch rugby tourney in Phuket open to all