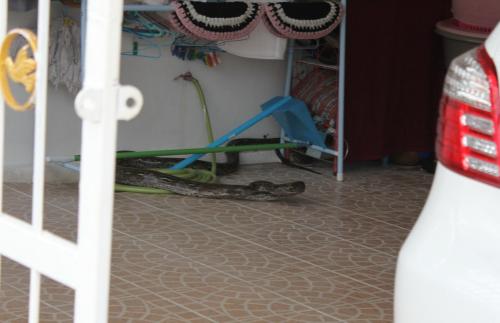 PHUKET: A woman was alerted to the presence of a giant snake in the carport of her home in Phuket Town yesterday by her cat.

“When I went out to hang my clothes up to dry, I saw my cat staring at something,” said Saisamorn Sungmek.

Kusoldharm Rescue Foundation workers responded to Mrs Saisamorn’s 6:30am call for help and wrangled the five-meter python out from under the drying rack in her carport.

“When the snake saw us, it tried to escape down a drain but it couldn’t because the hole was too small,” a rescue worker said.

“It took about 10 minutes for us to capture it,” he said.

Mrs Saisamorn believes the snake entered her carport for protection from rain.

The python was to be released at an undisclosed jungle location.