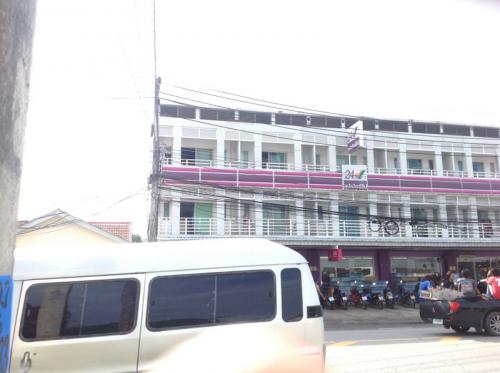 PHUKET: Two fire trucks rushed to the SuperCheap convenience store located about 30 meters from Phuket’s renowned Wat Chalong temple on Saturday after being notified of a fire there at about 8:30am.

“When we arrived at the scene we were confronted by flames coming from a staff room on the third floor of the building,” said Capt Kraisorn Boonprasop of the Chalong Police.

It took firefighters about 10 minutes to squelch the flames.

“Once the fire was out, we went in and inspected the third floor. We found two rooms had suffered severe damage,” Capt Kraisorn said.

“The staff told us that one of them put clothes into the machine to be washed. Ten minutes later they saw smoke pouring throughout the third floor,” he said.

Staff attempted to put the flames out with fire extinguishers, but were unsuccessful, Capt Kraisorn said.

“We expect the fire was caused by an electrical short in the wiring of the machine,” he said.

The fire caused an estimated 30,000 baht in damage.