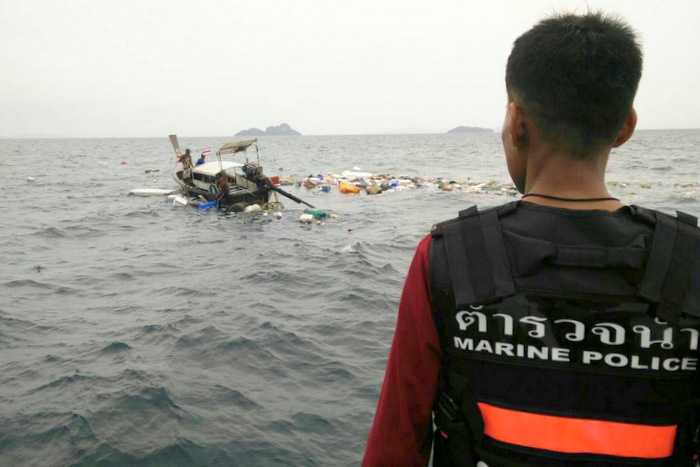 PHUKET: Marine Police are continuing their efforts to locate a crewman still missing from a cargo boat that sank in a storm two kilometers off Phi Phi Island yesterday afternoon.

The Sor Jatuporn was carrying goods from Ao Nang on the Krabi coast to Phi Phi Island when it was slammed by a storm, said Krabi Marine Police Inspector Chaiyasit Kancharoen.

The men were in the water for about 30 minutes before the rescue team arrived.

“We arrived at about 4pm,” Lt Col Chaiyasit said. “The weather was rough. Strong winds and waves hit the boat, causing it to sink.”

Marine Police pulled 14 survivors from the water, but one crewman, named by police only as “Mr Au”, remains missing.

Divers this morning descended on the wreck, lying on the seabed some 25 meters below the surface, to search for his body.

“Mr Au is the brother of one of the crew,” Lt Col Chaiyasit explained. “Apparently, he could not swim; we believe that his body may still be on the boat.”

Boat owner Torsak Praditcharoen, 59, explained that the Sor Jatuporn left the mainland at about 1:30pm.

“The boat was transporting consumer goods, such as food, drinks and other products, with Capt Seksan Changrua, 50, at the helm. One of the crew is Thai, the rest are Myanmar nationals,” he told the police.

Mr Torsak estimated the monetary cost of damage at about 2 million baht.

Marine Police confirmed that they were still investigating the specific reasons that the boat sank.

Kiwi arrested in Phuket for drug dealing, wanted for fraud