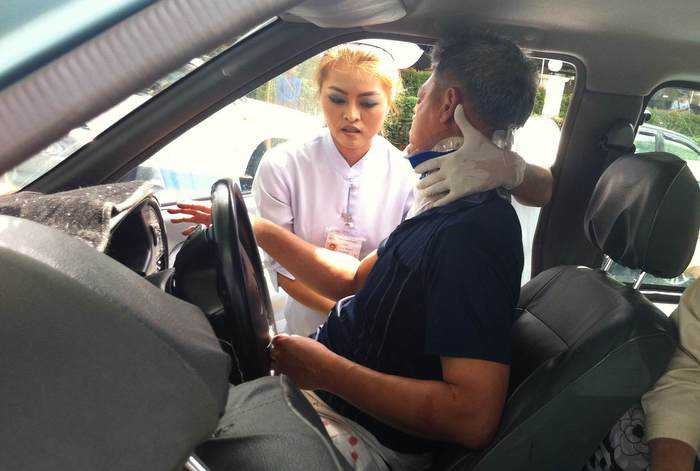 An Isuzu pick-up truck had hit the back of Honda saloon car opposite the Toyota dealership on the southbound side of the road, causing the car to skid and hit a motorcycle at 11:30am.

The driver of the pick-up then swerved, mounted the median strip and hit a tree.

Mission staff were able to help four people out of the pick-up and escort them to the hospital.

The driver, Annop Thinphang-nga, 54, injured his back and suffered leg abrasions.

Passenger Keasinee Thinphang-nga, 50, was able to walk with orderlies to the hospital and appeared relatively unharmed, while Pimpha Thinphang-nga, 88, suffered a nosebleed. She received on-the-spot first aid.

Hospital orderlies had a more difficult task removing Veeravut Thinphang-nga, 48, as he was wedged in the back of the two-door pickup.

The four injured people were transferred to Vachira Phuket Hospital later in the day.

“Ms Pimpha and Mr Veeravut will stay under observation, while the other two have been discharged,” Vachira Phuket Hospital staff told the Gazette.

Sornchai Nookaew, the motorcyclist, suffered minor injuries to his legs, but declined to be taken to the hospital. The driver of the Honda was uninjured.