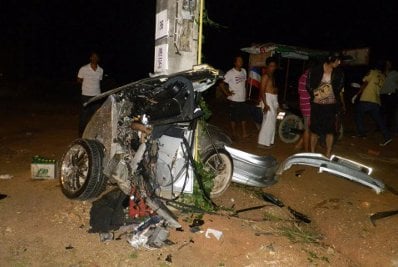 PHUKET: Police are investigating what prompted a 57-year-old driver to accelerate to such a speed in the early hours of this morning that when his car flew off the road it was cut in half by a roadside power pole.

Thalang Police duty officer Patiwat Yodkwan was notified of the high-speed accident at at 2:45am.

Due to severity of the initial reports, he arrived at the scene, at the u-turn on Thepkrasattri Road near the Karn Keha public housing estate in Srisoonthorn, Thalang, with Kusoldharm Foundation rescue workers, Baan Nai Klum volunteers and Thalang Hospital EMS staff.

At the scene, they found a Toyota Corolla cut in half, with the front half still jammed to the power pole.

All had suffered serious injuries. Mr Suchart and Mrs Sakul were rushed to Thalang Hospital and Mr Suthep was rushed to Vachira Phuket Hospital.

Police believe that Mr Suthep was the driver because his lower right leg had been severed and was still stuck to the accelerator.

From witnesses reports, police believe that Mr Suthep was accelerating in order to chase another car.

As he reached the u-turn, he lost control of the vehicle, which slammed into the power pole.

Police are continuing their investigation to determine which car Mr Suthep was chasing and why.