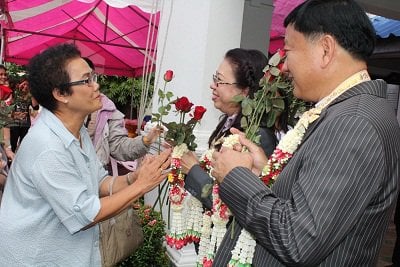 “Phuket is considered a world-famous tourist destination. The important thing that will continue to attract tourists is the island’s beautiful scenery and environment.

“The development of the province should be in accordance with environmental preservation. Tourists who visit Phuket expect to see different kinds of interesting things. For example, some of them want to visit the beach while others want to experience the local lifestyle, traditions and culture.

“What causes the most trouble in Phuket is the traffic. Both private and governmental organizations, especially the tourism-related organizations, have tried to build more roads to alleviate traffic congestion.

“Also, myself and my team have tried to push forward several projects, such as the light-rail project and the Darasamuth underpass. We have invited developers to invest with us and we have received their great cooperation. It is likely that those projects will be soon successful,” he said.

Looking back at his four years of service as a Phuket Vice-Governor and two years as governor of the province, Gov Tri said he was happy with the progress made during his time on the island.

“My plan to develop Phuket was focused on infrastructure, tourism promotion, environmental preservation and the light-rail project, which I now consider quite successful because the Cabinet has approved the project and assigned the relevant organizations to move ahead in the right direction.

“This project [light-rail] needs a great amount of budget funding, and this is why it is not yet completed,” said Mr Tri.

Governor Tri called on the people of Phuket to be good hosts to tourists. “Take care of them during their stay and do not take advantage of them,” he said.

He also urged the incoming Phuket Governor, who has yet to be chosen by the Cabinet, to make provincial infrastructure development and environmental problems, such as water pollution and garbage problems, as top priority.

Looking ahead to his retirement from civil service, effective today (September 30), Governor Tri said he was looking forward to spending more time with his family, especially his grandchildren.

“It has been an honor to serve as governor, which many administrators consider to be the ‘dream job’. However, I now look forward to taking a rest and spending time getting used to ‘family life’,” he said.

However, he also spilled the beans that he has had a long-term interest gardening projects.

“I have a friend who owns a garden shop, and he would like me to become a partner so we can conduct business selling trees together.

“But before that I would like to take a two to three month before starting to do what I would really like to do,” he added.

As the Thai Cabinet has yet to select a new Governor of Phuket, Vice-Governor Sommai Prijasilpa will take up the role of Acting Governor, effective tomorrow.

Car cut in half on impact with Phuket power pole