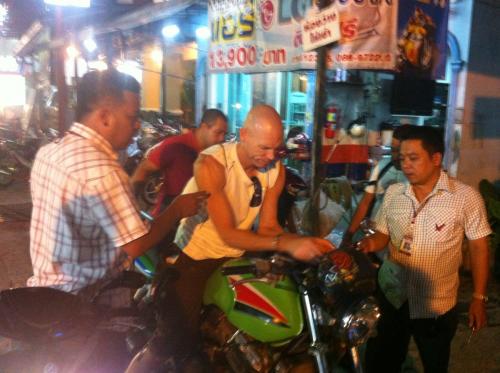 PHUKET: Police last night arrested a Canadian man wanted for allegedly stealing 100,000 baht in Chiang Rai after photos he posted on his Facebook page were recognized as having been taken in Patong.

Police arrested David Peter Sundstorm, 39, after they spotted him walking out of a restaurant on Nanai Road (map here) at about 8pm, explained Patong Police Deputy Superintendent Somsak Thongkliang.

Officers tracked down Mr Sundstrom after a 58-year-old British man named by police only as “Mr Anthony” presented an arrest warrant for the Canadian along with proof he had been staying in Phuket’s top party town.

“Chiang Rai Provincial Court issued a warrant for Mr Sundstrom’s arrest on June 5. The warrant was issued in relation to a complaint that Mr Sundstorm stole 100,000 baht from Mr Anthony about a year ago,” said Lt Col Somsak.

“Mr Anthony figured out that Mr Sundstorm was hiding in Patong, so he reported the case to us. We checked Mr Sundstorm’s Facebook page and saw he had posted several pictures of places in Patong,” he said.

Police believe Mr Sundstrom had been staying in Patong for about three months before being discovered.

“We established that he was staying at a restaurant-guesthouse near Soi Nanai 2, so we went there and waited for him,” Lt Col Somsak said.

Officers moved in and arrested Mr Sundstorm after they saw him exit the restaurant and mount a motorbike.

“The man confirmed that he was Mr Sundstorm, but denied that he stole any money,” Lt Col Somsak said.

“Regardless, we placed him under arrest and sent him to Chiang Rai City Police to face legal action there,” he said.