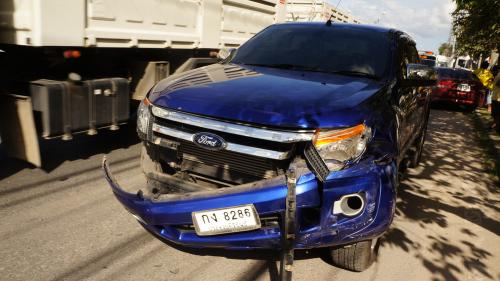 PHUKET: A 66-year-old man, his wife and their toddler granddaughter luckily escaped injury this afternoon when the car they were travelling in was shunted from behind by a Phuket tour bus at speed on Thepkrasattri Road in Koh Kaew.

The force of the impact sent Saeree Krajangsee and his Honda City sedan careening over the median strip and slamming into a pickup truck parked on the far side of the road, about 100 meters north of the Isuzu showroom.

Two people were sitting in the pickup when the car came hurtling toward them.

No one was injured in the collision, despite the front passenger door bearing the brunt of the impact with the pickup truck before the car spun and slammed into the curb.

“The bus was travelling quite fast. It hit my car, forcing it across the center strip and into another vehicle parked on the other side of the road,” Mr Saeree told Phuket Gazette reporters at the scene, before the police arrived.

Veera Tonlampang, the driver of the bus, which was emblazoned with “Natural Bus” in Thai across the top of the windscreen and “Mode Tour” along the sides, did not agree with Mr Saeree’s account of the accident.

“I was heading to Phuket Town from the airport. I was driving in the right-hand lane when the Honda cut in front of me,” he told the Gazette.

“I couldn’t stop the bus in time to avoid the collision,” Mr Veera said.

Police later arrived to assess the damage and to organize a tow truck for the Honda City.

Officers have yet to charge either driver over the collision.

Canadian arrested in Phuket after Facebook gives away his locale