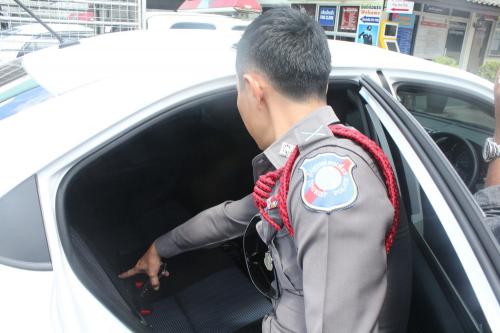 PHUKET: A Russian man is recovering in hospital after being shot in the back during a drive-by in Rawai on Saturday night.

Maksim Klocskov, 32, was shot in the back after a bullet penetrated the trunk and back seat of the car he was riding in.

“We found the Toyota Vios at the hospital with a bullet hole through the trunk. There was also a bullet exit hole in the backseat of the vehicle, as well as blood stains,” Lt Col Jumroon said.

After renting the car that night and going out for pizza, Mr Klocskov’s group of friends were driving along the Rawai beachfront road. Mr Klocskov was sitting alone in the backseat.

“Two youths rode by on a motorbike and then swung around and started to follow the car, we were told,” said Col Jumroon.

“Mr Klocskov’s friends believe the cause of the shooting might have been due to the Vios cutting the motorbike off,” he added.

None of Mr Klocskov’s friends could recall the license plate number or color of the motorbike.

Canadian arrested in Phuket after Facebook gives away his locale