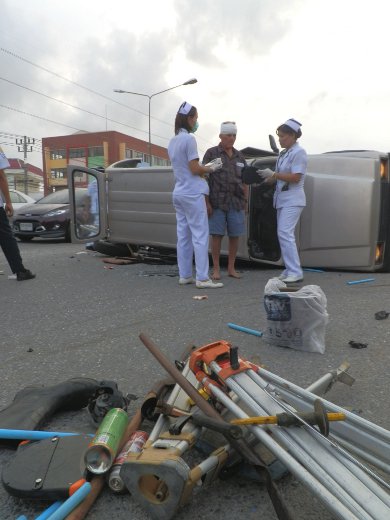 PHUKET: An 81-year-old Canadian man who sustained head injuries in a two-vehicle collision on Thepkrasattri Road in Phuket yesterday evening is now calling for speed limits to be posted in built up areas.

Thalang Police at 6pm were notified of an accident at the notorious u-turn in front of the Provincial Electric Authority substation in Baan Lipon, Srisoonthorn subdistrict.

Arriving at the scene with Kusoldharm Foundation rescue workers, they found a badly-damaged Suzuki SJ413 jeep on its side.

The driver, Guenter Bellach, sustained a gash to the top of his head and was bleeding heavily when helped from the vehicle by rescue workers.

The other vehicle, a yellow-plated passenger van, was damaged on the front driver’s side.

The van driver, 30-year-old Aekkarat Yod-iat, told police he was heading southbound when the jeep pulled out in front of him, making it impossible for him to stop in time.

Mr Bellach, a German-born Canadian who still works part time as a surveyor, had a different version of the events.

Speaking from Vachira Phuket Hospital, where he spent the night, he said he saw the van coming, but estimated that he had time to complete the u-turn and cross over into the slow lane before the van arrived.

“If he [the van driver] had just stayed in his lane, nothing would have happened. Instead, he tried to pass me on the left. He doesn’t know how to drive,” Mr Bellach said.

Mr Bellach called for speed limits to be posted in built up areas so that accidents will be avoided in the future.

He underwent a computed tomography scan at the hospital, which indicated no signs of internal injury, and has been cleared by doctors to return home this afternoon.