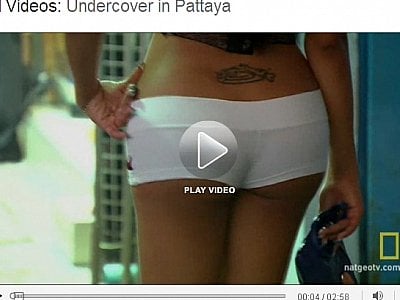 The trade in sex and bodies
Phuket Gazette / The Nation

PHUKET: A National Geographic Channel documentary tonight sheds light on the trafficking of Central Asian women to Thailand for sex work. The programme, “Inside: 21st Century Sex Slaves”, looks at the case of Uzbek women caught in a web of deceit in Bangkok and Pattaya (click here for preview).

It focuses on the efforts by Freeland – a non-governmental organization that fights trafficking of people and wildlife – and Thai law-enforcement officers to extricate two young women and take action against the criminal network that brought them to Thailand.

The spotlight is on individuals caught in the Bangkok and Pattaya underworld. The size of the network involved is hard to gauge from this report, but the “Uzbek connection” is a slice of the local sex industry that has grown over the years, allegedly because rogue army and police officers protect it.

The operation includes criminals from the Middle East faking passports and peddling drugs. Further arrests were made after the documentary was completed.

Part of the footage was shot with cameras concealed on Freeland agents as they searched bars in downtown Bangkok for a “mamasan” responsible for encouraging Uzbek women to come and work here, as well as the higher-level traffickers.

The mamasan was also accused of forcing the Uzbek ladies to undertake sex work on a casual basis by approaching men – generally Middle Eastern men – in notorious pick-up joints along lower Sukhumvit Road.

There are many twists and turns in the story, and the film does a good job of showing why human trafficking is difficult to combat and prosecutions hard to achieve.

Thousands of people come to Thailand in search of work every year, mostly from adjacent countries. Their situations vary greatly, but women and young men commonly lose control of their circumstances when the broker or a go-between seizes their passport, effectively trapping them here. Often there are threats of violence and sometimes they are simply locked up.

Individuals like the Uzbek women at the center of this report say they suddenly found themselves in a web of extortion and threats were made to harm them or their family back home.

The film is at times overly dramatic, but at one point the prospect of violence is clear and police must enlist support for a rendezvous arranged to try and arrest key figures in the network in which the Uzbeks are caught.

This report is timely. There has been serious criticism recently of Thailand’s efforts to counter human trafficking, characterized as lethargic and half-hearted. Freeland seem to have done a remarkable job just getting the Thai police to participate and be filmed during an undercover operation that had the potential to turn nasty.

The Uzbeks might only be “slaves” to a certain degree and lower on the scale in terms of their personal trauma, compared to the many horror cases found in Thailand, but the fact remains that this is organized crime in downtown Bangkok – with tentacles that spread across the continent.

There have been many credible reports in the past couple of years about young migrants killed at sea or forced to work for months on Thai trawlers for no wages, yet the government follow-up on this has been scandalously deficient.

Early this week a man was found floating in waters off of Phuket’s fishing port in Rassada. Police believe the stab-riddled body was of a Burmese fisherman, though no form of identification was found.

Only now, with the US reportedly on the verge of downgrading Thailand to Tier-3 status, warranting economic sanctions because of the lack of concerted action against trafficking, does it appear that the government might do something.

The Labor Ministry conceded on Tuesday that cases of trafficking are poorly handled because its five departments are not integrated. Officials are due to meet next week to discuss a master plan to combat trafficking in key sectors such as crews on fishing trawlers and migrant workers in Thailand in general.

Sadly, however, there is considerable skepticism about the approach, given the widespread corruption in the government hierarchy. Trafficking is deeply entrenched because it pays its sponsors and enablers high dividends.

The TV documentary shows some of the complexity and the sleazy side of the Thai sex industry. It also shows how people caught in difficult circumstances can get drawn in – and that it can be tough for them to escape.