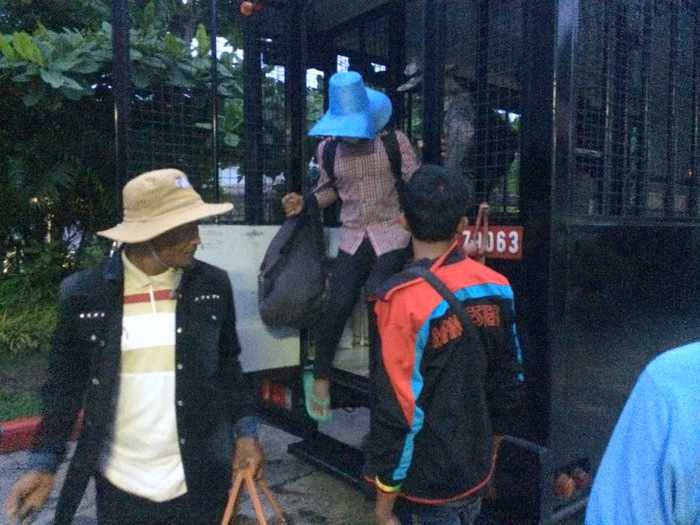 One of the workers told the Phuket Gazette that the workers were trying to leave Thailand as soon as possible for fear that the Army would crack down on foreigners living in the country.

“We came to Thailand to work at a construction site on Koh Yao Noi for a year. After we heard about the coup and crackdown on immigrants, we decided to go back home. Now we are all getting arrested,” he said.

An undercover officer notified police that the Cambodians were arriving on Phuket by boat at about 7:30pm yesterday.

“We arrested 27 men and 10 women when they landed at the pier,” said Phuket Immigration Superintendent Sanchai Chokhayaikij.

“They were unable to present their passports, permits-to-stay and work permits, so we took them to the Phuket Immigration Office to check their records.”

All of the workers were charged with illegally entering the country and will be deported, Col Sunchai said.

“We are transporting them in groups by road to Sa Kaew province, in Northeastern Thailand,” said Col Sunchai.

“Since there have been so many arrested, it is going to take three days to get them all to the border.”

Yesterday, 65 Cambodian construction workers were arrested under similar circumstances in Rassada. The group had finished work at a hotel on Koh Yao Noi and were arrested after landing on Phuket, en route to their home country (story here).

Department of Employment director-general Pravit Khiengpol, however, has firmly denied the rumors of a junta-ordered crackdown.

“Some ill-intentioned people have spread this false stuff,” he told The Nation (story here).

Mr Pravit insisted that all 441,569 legally registered Cambodian workers could still work in Thailand as usual.

He disclosed that relevant authorities had in fact planned to extend the grace period for registered foreign workers who had not yet completed all procedures in the nationality-proving process.

Without the extension, they would have to leave Thailand by August 11, he said.