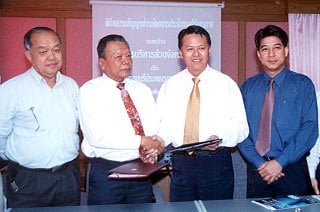 PHUKET TOWN: The island’s first public buses will arrive on March 20, and full regular services will begin on April 1, the Phuket Provincial Administrative Organization (OrBorJor) announced today. The announcement was made at the formal signing of an agreement between the OrBorJor and Bangkok-based Thonburi Automotive Assembly, which will build and rent 12 buses to the OrBorJor. Wisut Santikun, Deputy President of the OrBorJor and Chairman of the Public Transportation Board, said, “Three buses are ready to use but we need 12. However, people will see buses on the streets after March 20 and all 12 buses will be ready to begin services on April 1.” The plan is to run two scheduled bus routes and, if these are popular, to expand the service in the future. One route will run between Baan Samkong School and the Phuket Vocational College. The other will run between Rajabhat Phuket Institute and the Laem Chan Health Office on Chao Fa Nai Rd. When the full service is running, buses will depart every 10 to 30 minutes between 6 am to 8 pm. The fare will be 10 baht.