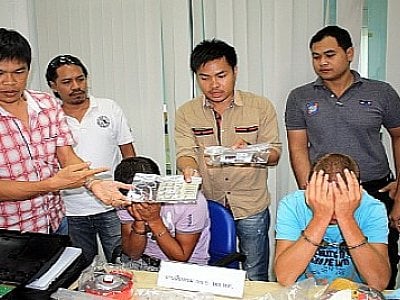 Tourist Police moved in and arrested Tervel Kaloyanov Dimitrov, 31, and Ancho Stankov, 33, at about 8pm while they were removing the panel from a Kasikornbank (KBank) ATM machine on Patak Road.

The men used a “skimmer” to scan information from legitimate cards being inserted into the machine and a fake keypad to record the PIN numbers being entered by customers, Tourist Police Capt Somdej Saraban explained at a press conference this morning.

“They were to sell the information they had collected to ‘agents’ located in tourism destinations both here in Thailand, such as in Pattaya, as well as overseas,” he explained.

Tourist Police put the ATM under surveillance after a KBank staffer, doing his routine delivery to top up ATMs with cash, reported the machine as “suspicious”.

“The bank worker reported that the insert slot for the ATM card and the keypad both looked suspicious, as if covered by an ATM scanning device [called a ‘skimmer’],” said Capt Somdej.

While police were watching the machine, three foreigners arrived and started to remove the front panel and skimming devices from the ATM.

Officers moved in to make the arrests, but the third man who was with the two suspects evaded capture, Capt Somdej explained.

“Officers searched the holiday bungalow the men had rented and found more skimming equipment,” he added.

Mr Dimitrov and Mr Stankov were taken to Chalong Police Station, where they are now being held, and charged with possession of electronic equipment with the intent to produce fake electronic cards, and with entering Thailand illegally.