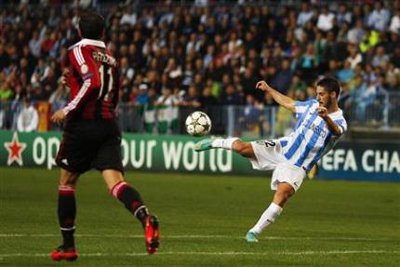 PHUKET: Barcelona, Manchester United, Porto and unlikely contenders Malaga can book their tickets to the Champions League knockout stages by winning in midweek.

The quartet have all won the opening three group games and if they win a fourth will take their places in the last 16 with two matches to spare.

Schalke 04, Borussia Dortmund and Shakhtar Donetsk could also take a big stride towards qualification with victories while champions Chelsea, big-spending Manchester City and former winners Juventus are under severe pressure.

“The Champions League is reaching a critical phase and we cannot afford any more mistakes,” said Arsenal manager Arsene Wenger.

“But this group of players is strong, we have belief and we go to Schalke on Tuesday believing we can get a good result there.”

After beating Montpellier and Olympiakos Piraeus in their opening two Group B games, Arsenal lost 2-0 at home to Schalke two weeks ago and another defeat in Germany would put their hopes in the balance.

The Londoners are second in the group, one point behind Schalke but three clear of Olympiakos and five ahead of Montpellier who also meet tomorrow.

Things look far rosier for Manchester United who, without playing particularly well, have won their three Group H matches and go to Portugal’s Braga on Wednesday in good spirits having gone top of the Premier League with a 2-1 win over Arsenal at the weekend.

Braga established a 2-0 lead at Old Trafford two weeks ago before losing 3-2 and coach Jose Peseiro believes they can grab all three points this time round.

Good players
“We know about the resources and the value of Manchester United but that doesn’t stop us thinking that we have our chances, that we have good players, that we have a good team, and that we are ready to do good things and win the match if we can,” he said.

Barcelona can guarantee a place in the last 16 by winning at Celtic on Wednesday, as can Porto with a victory at Dynamo Kiev tomorrow.

Malaga need to triumph at AC Milan to qualify. The Italians have only won six of their last 27 Champions League matches.

Chelsea, who have made an ordinary start to the defense of their crown with a win, a draw and a defeat, cannot afford another reverse at home to Shakhtar on Wednesday after losing in Ukraine two weeks ago.

That victory put Shakhtar top of Group E with seven points, three ahead of Chelsea who are a point clear of Juventus and three in front of Danish newcomers Nordsjaelland.

Since losing at home to Barcelona in the knockout round in 2006, Chelsea have lost just two of 34 Champions League matches at Stamford Bridge but a run of six successive wins there ended when Juventus secured a 2-2 draw in September.

Juve have drawn a record nine successive European games and lost their 49-match unbeaten Serie A run when they were beaten by Inter Milan on Saturday.

They should be too strong for Nordsjaelland on Wednesday but visiting coach Kasper Hjulmand believes his team can still reach the last 16 following their home draw with Juve two weeks ago.

“Every point we can get takes a major effort – and is a sensation. Our chances are not great but we believe in them,” he said.

Manchester City look to be heading out with just one point from nine in Group D behind leaders Dortmund (seven), Real Madrid (six) and Ajax Amsterdam (three).

Ajax outclassed City 3-1 in Amsterdam two weeks ago and the Dutch side travel to Manchester on Tuesday hoping that a repeat can put their domestic league woes behind them.

Despite losing 2-0 at home to Vitesse Arnhem on Saturday and still being without striker Kolbeinn Sightorsson, Ajax coach Frank de Boer is confident.

“We lacked aggression and didn’t play our normal game but I am convinced that will be different on Tuesday,” said De Boer.