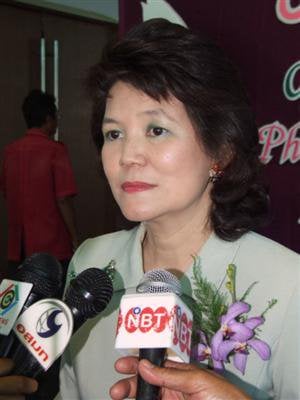 Anchalee Vanich-Thepabutr, who currently serves as Deputy Secretary of the Office of the Prime Minister’s political affairs section, made the announcement via a press release issued through the Phuket Provincial Office.

According to the press release, Phuket will get two billion baht in funding for the project as part of phase two of the government’s 100-billion-baht ‘Strong Thai Action Plan 2012’ stimulus package.

Administered by the Ministry of Finance, the huge spending bill will pump money into the economy, boosting it over the last three months of 2009, Mrs Anchalee wrote.

Terms of the spending plan are still under review by Parliament, but final approval is expected prior to the start of fiscal 2010, which begins on October 1, 2009.

When completed, the center will allow Phuket to host international exhibitions on the same scale as the International Tourism Bourse (ITB) held annually in Berlin, Germany, she wrote.

Events hosted at the center will boost tourist arrivals and lead to increased revenue over the entire island, she said.

Better economic infrastructure and human resources will need to be developed to cope with the expected surge in arrival figures above the present rate of about five million per year, Mrs Anchalee wrote.

The site of the project will be a 150-rai plot of seaside land on the northern tip of the island.

The land is currently held under the Treasury Department’s State Property Management and Services Office, or Ratchapassadu.

The site is near the 50-million-baht Phuket Welcome Gate, a facility conceived by Mrs Anchalee and built during her tenure as PPAO president.

Plans to build an ICEC to help support the island’s hotel industry have been around for decades, but political instability and infighting over where the project should be located have prevented the dream from ever becoming reality.

Detractors, especially those with business interests in the more developed southern part of the island, feel the location is too remote from the island’s main population center.

Proponents say the ICEC will help further develop nearby Phang Nga as well as Mai Khao, which is already home to the Phuket International Airport and is slated to be the new home of Police Region 8 headquarters in a few years’ time.