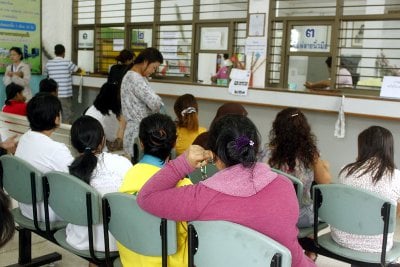 PHUKET: The Phuket City Municipality Pawnshop is reporting brisk business this week as parents pawn off gold to pay for back-to-school supplies for their children.

Mr Boonsong Korecharoen, accountant and acting manager of the shop on Kamoraphat Road, told the Phuket Gazette that recently they had been dealing with a daily volume of about 400 people.

About 99 per cent of these people were pawning gold ornaments to pay for student tuitions, fees and related expenses. As a result, the shop has seen about 20 million baht change hands over the last month and about 1mn baht daily, he said.

“Our pawnshop is now getting very busy, with many people coming to use the service. Some come to pawn their belongings, others to extend their repayment periods. A small number of people are also paying back loans and reclaiming their valuables,” he said.

“In order to meet the high demand, we have an extra 50 million baht during this peak period,” he added.

“The economic situation isn’t good right now, so more people need cash. That’s why they come to the pawnshop. Most of the items people pawn are gold ornaments. The remainder are electrical appliances and some other valuable items,” he said.

Phuket City Municipality Pawnshop is one of three government-run pawn shops operating on the island in accordance with a national government policy to curb loan sharking and other unauthorized money-lending practices.

The other two shops are run by Patong and Cherng Talay municipalities. Private gold shops also offer regulated pawn services, but their rates are not as attractive as those offered by the government-subsidized counterparts.

“In response to current government policy, we are further helping the people by reducing the interest rate from May through December. Those who borrow amounts less than 5,000 baht are charged just 0.5 per cent interest. If the loan is over 5,000 baht, the interest rate is 1.0 per cent,” he said.

Many government schools in Phuket re-open in mid-May, but most of the schools under Phuket City Municipality administration have re-opened early this year because their classrooms will be used as makeshift dormitories for young athletes arriving to take part in the upcoming Phuket Games, which runs from May 26 to June 5.

Grounded dive boat back in Phuket