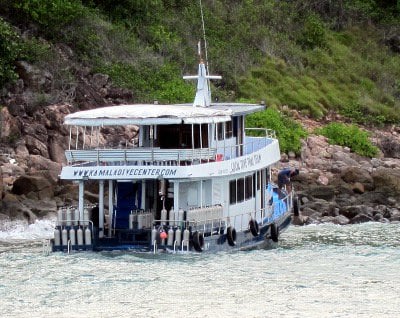 PHUKET: The dive boat forced to ground on Koh Gai island after its hull cracked in stormy weather last weekend was re-floated and towed back to Phuket yesterday.

Though frightened, none of the 16 people on board the Parapis 7 during the grounding were reported as suffering any injuries, according to eye-witnesses who carried out the rescue.

Narong Chaimo, general manager of Kamala Dive Center, who organized the dive tour, said in a public statement that at about 4:30pm on May 4 the captain of the Parapis 7 sent a distress call to the Royal Thai Navy, Marine Police, speedboat operators and nearby dive boats.

The first boat to render assistance was from Andaman Ocean Safaris, with tour leader and dive instructor Niklas Komradsval on board.

“Our boat and the Kamala Dive Center boat [rented from and operated by Aloha] made the second dive on the lee side of Phi Phi Lei Island because of the wind,” said Mr Komradsval.

“When we rounded the island, we started to run into some bigger waves – about two to three meters high. But the size of the wave wasn’t the problem, it was the frequency of the waves,” he added.

“Before we got there we saw smoke rising from the boat, so that meant the engine was under the water,” he explained.

“We took about 25 minutes to safely get to their boat. By then, their engine had failed. So we had to send seven of our instructors into the water with floatation devices to help everyone over to our boat,” he said.

Due to the calm waters where the Kamala Dive Center boat was grounded Andaman Ocean Safaris did not need to deploy either of their two emergency rafts, which each have 25 person capacity.

The Parapis 7 captain grounded the boat on the lee side of Koh Gai island, which allowed the transfer of people to take place in safer, flat water, Mr Komradsval explained.

“For what I saw, they were doing the right thing. They went into the shallow area near Gai Island, which immediately put everyone into safety. They were on the lee side of the island, so by the time we transport the people from that boat to our boat we were in flat water,” Mr Komradsval explained.

“It was such an unfortunate event. I don’t put the blame directly to anyone. It was just a combination of freak wave and wrong angle of the boat. For our part, we just received the direct call for an assistance and acted appropriately,” Mr Minnaar said.

“There were some concerns raised by a British woman about the conditions of the Kamala Diving Center’s boat, which didn’t make any sense. Such as the hull of the boat being rusty, despite it being a wooden boat,” Mr Minnaar added.

Andaman Ocean Safaris cancelled their last dive scheduled for the day after retrieving the tourists and crew, to give them enough time to slowly and safely make it back to Phuket and so they could also assist Southern Siam Divers, who were in need of an extra bilge pump.

Everyone was already on board Andaman Ocean Safaris boat by the time the Phuket Marine Police arrived at 6:20pm.

“If we can see evidence that the ship has been checked regularly, its passed inspections and its documentation in order then there most likely won’t be any charges filed against the company,” said Lt Jeerayuth Onthong of the Phuket Marine Police.

All necessary safety equipment was on board; 45 life jackets, emergency oxygen and medical kit. The captain’s cabin is equipped with sonar, compass and radio, said Mr Narong in his statement.

The incident is now under the investigation process by Muang Krabi Police Station.