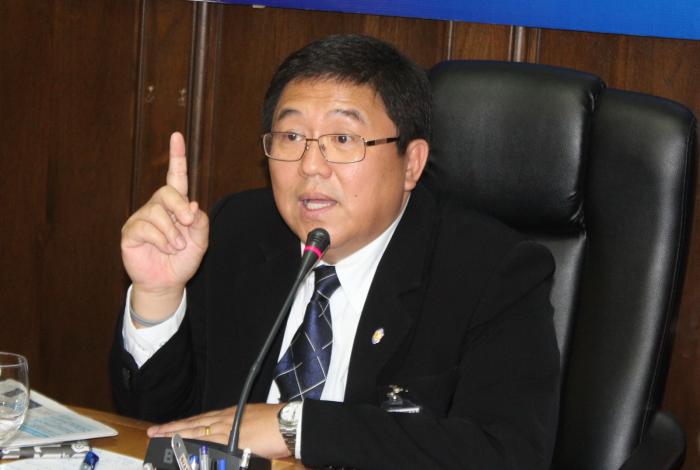 PHUKET: The Phuket Governor has denied accepting bribes and urgently ordered officers to investigate corruption allegations made by the Anti-Corruption Organization of Thailand in a Facebook post yesterday.

“I have never accepted tea money, or ordered any of my officers to do so, from any business – legal or illegal,” said Gov Chokchai Dejamornthan.

The governor set up a committee to look into each allegation at a meeting held at 2pm at Provincial Hall today.

“We will contact the person who posted this information to provide us with proof and more details. Everything will be done in a fair and transparent manner. If there is any truth to this, the person(s) responsible will face the full force of the law,” said Gov Chokchai.

Additionally, the governor launched a campaign named ‘White Phuket’ and invited the public to file any evidence directly Provincial Hall.

The Facebook post that started all this was created by Dr Mana Nimitmongkol, secretary-general of the Anti-Corruption Organization of Thailand, with a photo of Laem Promthep accompanying it.

Dr Mana alleged that of the 12 major sectors of the government, namely local police; tourist police; immigration police; Border Patrol Police; the Crime Suppression Division; the Investigation Division of the Provincial Police; Investigation Division of Police Region 5; Region 8 Police; the office to combat human trafficking; the Employment Office; local municipalities; and the Phuket governor himself, corruption was rampant in several or all of them.

“I have learnt that corruption happens nationwide, but officers in Phuket do it without any fear of consequences,” Dr Mana wrote in his post.

From migrant workers and local vendors to hotels and foreign businessmen, Dr Mana alleged that tea money ruled supreme, and that any problems, such as migrant worker registration and the height limit on hotel construction, could easily ‘disappear’ if the right people were paid.

Any arrests that were made were usually done to boost arrest records while maintaining a private arrangement with the vendors, he added. He also said that many businesses in the area reported being harassed if they tried to follow legal procedures rather than lining officers’ pockets.

Dr Mana concluded his post by saying that nobody dared to step forward and state the truth for fear of repercussions, but that the only way to end the cycle was for Phuketians to mobilize and fight for their rights and the future of the next generation. He also called upon the government to support and protect people from living under a corrupt regime.

Gov Chokchai, after discussing all the allegations in the post, asked relevant officers to investigate further and report back to him by Friday.

Check back with the Phuket Gazette tomorrow for more details.