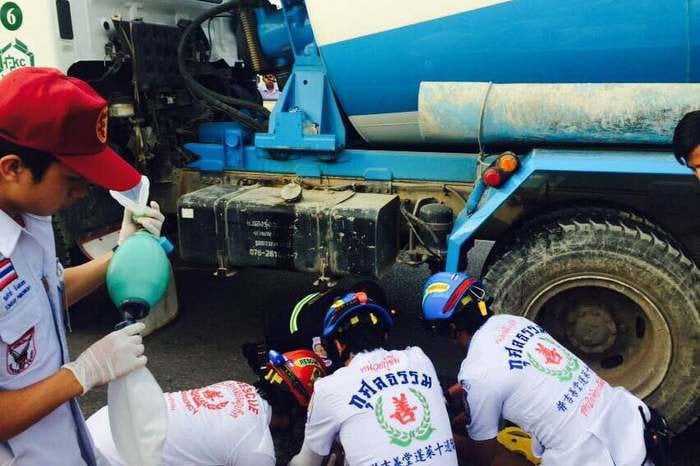 PHUKET: An 11-year-old boy was killed after he fell off the back of his mother’s motorbike and under the wheel of a cement truck yesterday.

Rescue workers arrived at the scene at the traffic light in front of Makro in Kathu to find Thanaphat Songserm severely injured underneath the truck.

Patchanee Songserm, 42, had just picked up her son from Witchitsongkram School and was heading home when they stopped at the traffic light, next to the cement truck,” said Maj Narong Muangduang of the Wichit Police.

“When the light turned green, both vehicles took off. Somehow, Mrs Patchanee lost control of the motorbike, causing her son to fall off and under the truck. He was dragged a short distance by the truck before it came to a stop.”

Nong Thanaphat was rushed to Vachira Phuket Hospital, but was pronounced dead on arrival by doctors. His mother suffered only minor injuries.

Police have yet to press charges against the truck driver or Ms Patchanee.

“We must question both the mother and the truck driver about the incident. If it turns out that either of them was driving recklessly, we are prepared to press charges for reckless driving causing death,” said Maj Narong.