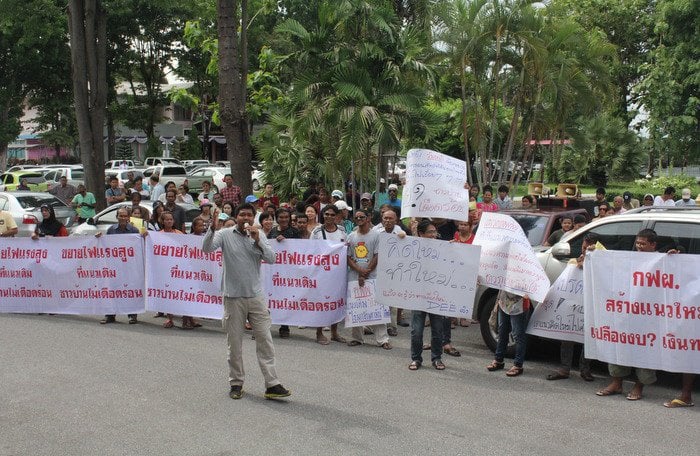 PHUKET: More than 100 locals from Thalang villages gathered at Phuket Provincial Hall yesterday looking for an update on a high-voltage power line project that is slated to run through their community.

Protesters filed a complaint on May 20 over the potentially negative effects a high-voltage power line project could have on their lives (story here).

The complaint was first given to Vice Governor Somkiet Sangkaosuttirak and related officers, as Governor Nisit Jansomwong was attending a tsunami drill that day.

After they filed the complaint, they heard nothing back from the Governor’s Office, prompting the visit yesterday.

Governor Nisit promised the group yesterday that he would contact the Electricity Generating Authority of Thailand (EGAT) to set up a public hearing in two weeks.

“I will contact the EGAT representative [responsible for this project] to clarify this issue with villagers within two weeks. The date and time will be announced later,” Gov Nisit said.

“We do not want to protest against the high-voltage power line, we just don’t want it to pass over our land,” said Mr Samran.

“The nearby land prices will drop because no one will want to live near a high-voltage power line, not to mention the health risks of the villagers living nearby.”

Some of the signs at the protest read, ‘Please put the electrical line in the ground’ and ‘Use the same old power line. No new lines’, which reiterates some of the seven alternate solutions villagers gave the government in their formal complaint last month.

“We think the expropriation money is not worth it. We have done a lot of work on our land and the land nearby. This will change hundreds of family’s lives,” Mr Samran added.

EGAT representative Thaweesak Srirajchaya explained that the purpose of the high-voltage power line is to provide Phuket with much needed electricity in order to prevent blackouts, as Phuket province has one of the highest electricity usages in the country.

“Right now, we are looking for the right places to install the poles. We have yet to finalize where the lines will be,” Mr Thaweesak said.