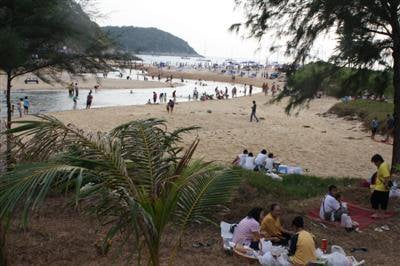 RAWAI, PHUKET: A ten-year-old boy celebrating New Year’s Day with his family at Nai Harn Beach is the first drowning victim of the year in Phuket.

Notified of the drowning at 5pm, Chalong Police Superintendent Chinnarat Rittakananond rushed to the scene with members of the Phuket Provincial Administrative Organization (PPAO) Tourist Rescue Center and workers from the Rawai Municipality’s Disaster Prevention and Mitigation Office.

They were too late to save Nong Max, who left his party of about 25 people and entered the surf with other children at the south end of the beach.

Friends called family members for help after Nong Max went missing, but to no avail.

His body was recovered about 20 minutes later and sent to Vachira Phuket Hospital in Phuket Town, where his relatives were inconsolable.

Drowning remains the number one cause of death among Thai children. Despite being an island, relatively few Phuket children know how to swim and drownings take place year round.

There were no lifeguards on duty at Nai Harn at the time as a new contractor is currently being sought to provide the service.

The PPAO, which believes the relatively calm surf conditions at this time of year lower the risk of drowning, hopes to have a new contract ready to put out for bidding this month.