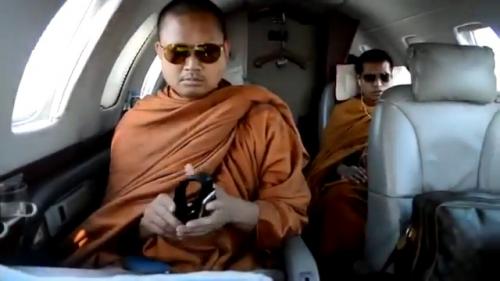 PHUKET: If renowned monk Luang Pu Nenkham is in Phuket, it is not on temple business, the Phuket Gazette confirmed yesterday.

Luang Pu Nenkham is wanted for questioning after being filmed on board a private jet while sporting brand-name sunglasses and a Louis Vuitton bag.

Chatpawit Jinapong, Director of the Phuket branch of the National Office of Buddhism, told the Gazette that he must be notified of any high-ranking monks visiting the island.

“I must be informed of any high-ranking or well-known monks coming to Phuket… Unless they come on private business,” said Mr Chatpawit.

“I know Luang Pu Nenkham. He is famous, as we have seen in the Thai media recently. I have heard that he has a lot of wealthy followers. Nonetheless, I have yet to be informed of him coming to Phuket,” he said.

Officials at Phuket International Airport said they could not confirm whether or not Luang Pu Nenkham was on the island.

“We can confirm which aircraft, including private jets, have landed on and departed from Phuket, but we cannot release the names of any people on the flight manifests,” one officer said.

Followers of Luang Pu Nenkham denied on Thursday all allegations against their revered spiritual leader, including a picture allegedly showing him lying next to a woman.

“The picture is doctored,” said disciple Pattaradej Sopongpanich, who also countered that there was nothing wrong with Luang Pu Nenkham riding in a private jet, given that someone else had arranged the trip for him.

“He was invited to carry out rites in Phuket, that’s why he was on the jet,” said Mr Pattaradej.

Luang Pu Nenkham had the expensive Louis Vuitton bag, said Mr Pattaradej, because followers had given it to him.

Commenting on the huge donations Luang Pu Nenkham had received, Mr Pattaradej said the board of Wat Pa Khantitham, where the monk serves as abbot, had kept records of all the donations and how they had been put to use.

“The donations are used for good causes, like helping people in need,” he said.

“I will see what can be done in line with the law,” he said.