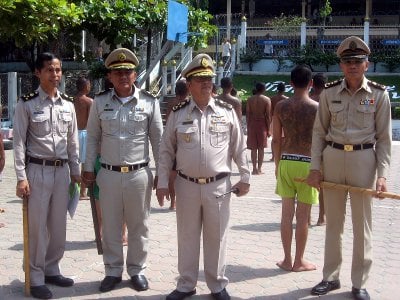 PHUKET: Phuket Provincial Prison has been declared a “White Prison”, with no cell phones and no drugs to be found within its walls.

The news follows six months of inmates, wardens and the prison grounds being searched. The searches failed to turn up any drugs or mobile phones, prison chief Rapin Nichanon announced yesterday.

The sustained campaign of searches follows a policy instituted by Corrections Department Director-General Pol Col Suchart Wongananchai, aimed at eliminating drug use and trade in Thai prisons – “and to protect [sic] prison officers from getting involved in drugs”, Mr Rapin explained.

“We currently have 1, 845 prisoners, of whom 1,562, or 84 per cent, were convicted of drug related crimes. That number shows us that drugs remain a serious problem in our society, therefore we have set up defensive measures to prevent drug problems among both our prisoners and officers.

“Prison officers search the prison area and prisoners’ belongings every week, and prisoners’ urine is tested for drugs every month. The officers themselves are asked to undergo urine tests every three months,” he said.

In addition to the regular drug testing, the prisoners and wardens are subjected to random drug tests.

In carrying out the anti-drug campaign, the prison works with police stations, the Health Office and the Phuket Training Center, which conducts drug addiction programs.

“The results of all drugs tests are sent to the Phuket Provincial Office and to the Department of Corrections head office in Bangkok,” Mr Rapin said.

The ongoing “White Prison” drug-trade crackdown follows news of prison officers being deeply involved in drug-supply operations at major prisons in the country, including the high-security facility in Nakhon Sri Thammarat.

In April, hundreds of inmates in the Nakhon Sri Thammarat facility were found to be involved in supplying drugs. Nearly 500 mobile phones and thousands of ya bah (methamphetamine) pills seized.

Prison wardens were investigated over the extent of the drug network operating within the prison.

In the wake of that furore, Public Sector Anti-Corruption Commission (PACC) Secretary-General Pol Col Dusadee Arayawuth said his agency would investigate prison staff involved in illicit businesses at prisons, including the drug trade.