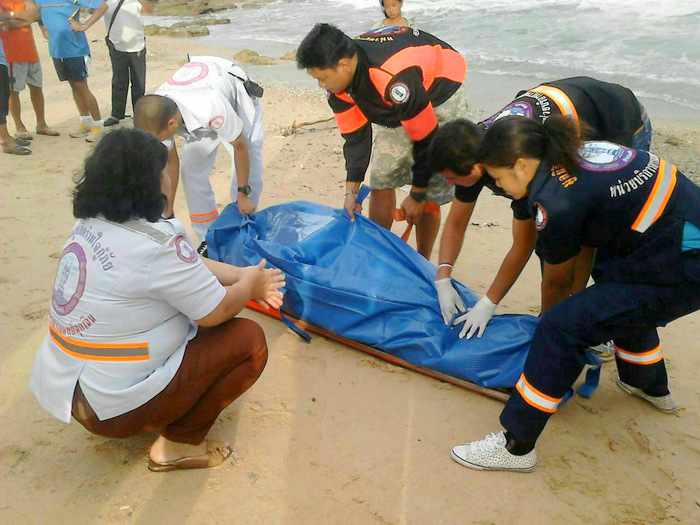 PHUKET: The body of Somchai Yungtala, 30, who was swept from the rocks near Phuket’s Promthep Cape on Tuesday afternoon, was found washed ashore this morning.

Relatives assisting rescue workers in the search for Mr Somchai found his body at Ya Nui Beach at about 5am.

Mr Somchai was visiting Phuket from Koh Yao Yai with his girlfriend when he was struck by a large wave and dragged out to sea while fishing.

The search continued yesterday, but to no avail.

The relatives maintained their coastal vigil for any sign of Mr Somchai at Ya Nui Beach at the advice of local rescue teams.

“The wind and the waves made it likely that if he had drowned, his body would either wash ashore there or at Nai Harn Beach,” said Rawai Mayor Arun Solos.

The body was taken to Vachira Phuket Hospital, where relatives can make arrangements for his funeral, said Mr Arun.

“I am so sorry to the relatives for their loss. We did our best to save him,” he said.

“Mr Somchai’s body will be home soon, so they can pay their final respects.”

In November, 20-year-old Chinese national Gao Yang, on holiday from studying in Singapore, slipped from the rocks at Promthep Cape and fell into the sea while posing for a photo with friends (story here).

His body was recovered after it was spotted by a passing speedboat three days later (story here).

“We have a few warning signs in the area, but that is not enough to let tourists know about the danger of falling from the rocks,” Governor Maitri said.

“We will post more warning signs on the way down to the cape. The signs will be in English, Thai and Chinese.”

Governor Maitri did not support the idea of fencing off the area or installing railings on the rocks.

“That might greatly affect the natural beauty of the area, which is why tourists visit this location,” he explained.

“We will order the local municipality, tour companies, tour guides and hotels to warn tourists about the danger of climbing down onto the cape.”

Phuket teachers told not to worry about work permit crackdown – yet