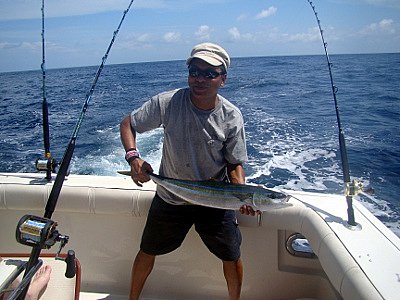 The body, discovered at about 5pm, was returned to Chalong Pier at about 6pm and taken to Vachira Phuket Hospital, his employer Martin Eleveld told the Phuket Gazette.

Mr Nati, 50, was a deckhand with fishing charter company Phuket Fish Boat and failed to arrive at work yesterday morning after a night shift aboard one of the company’s two boats.

His colleagues discovered that the boat’s dinghy was missing after a search of Chalong Pier and the nearby shoreline.

The dinghy was found being towed by a fishing boat after Mr Eleveld began searching Chalong Bay.

The fishermen told him they found it adrift near Coral Island, Mr Eleveld said.

“On the CCTV camera, we could see that he came out to the dinghy. He went down the stairs and we couldn’t see anything after that. He was carrying a small plastic bag and that was found near the stairs, so something must have happened to him around there.

“A speedboat found him out by Coral Island around the same area where the dinghy was found,” Mr Eleveld said.

Mr Nati is survived by his wife and baby son who is 11 months old.

Mr Eleveld, who had known Mr Nati for about four years, said he was a trusted deckhand during the 14 months he worked for Phuket Fish Boat.

Based on questioning of witnesses, police believe he may have been under the influence of alcohol when he boarded the dinghy, Chalong Police Inspector Jarun Bangprasert told the Gazette.

Another less likely scenario is that he panicked, jumped into the water and drowned, he added.