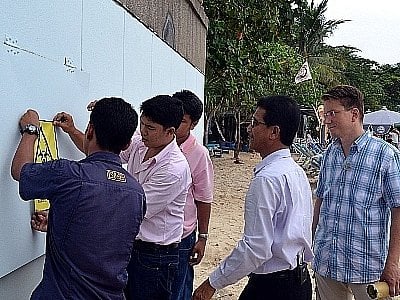 PHUKET: The host of the popular German TV travel show We Save Your Vacation today said he was “satisfied” with the action being taken by Phuket authorities to ensure untreated wastewater does not contaminate Phuket beaches.

Environmental engineer Siripong Pasari of Southern Thai Consulting Co Ltd today treated Mr Benko to a full explanation of what happened in March, when the German documentary crew filmed filthy wastewater making its way into the surf at Kata and Karon beaches.

The presentation today was a full repeat of the explanation given to Phuket Governor Tri Augkaradacha on May 30, including details of how generators will ensure wastewater pumps keep working during a blackout and new facilities to be installed will cope with extra loads during the rainy season.

“Of course, it’s not a perfect solution, but for me it is good to see that at least people are starting to take steps to improve the situation,” said Ralf Benko, host of the TV show.

“I think everybody has to be realistic. It is not possible to solve the problem in weeks or months. I think the important thing is that everybody knows about the problem.

Mr Benko explained that there was a similar situation in Turkey, but the effect there was “very serious”.

“Half of the guests staying at a hotel were put in hospital. It affected tourism in the whole region. That’s a really big problem,” he told the Phuket Gazette.

“So it’s important to start [taking action] before it gets to such levels and to do something to prevent it. Have warning signs. Inform people when they arrive at hotels. Tour operators should brief them to be aware that something is out there. Warn tourists to keep their distance [from where the wastewater overflows from the pumphouse],” he said.

To help Phuket authorities get off in the right direction, Mr Benko today presented them with a biohazard sign he brought with him.

The sign was attached to the hatch of the overflow outlet at the pumphouse on Kata Beach, where any excess wastewater pours onto the sand and flows toward the sea.

“In Europe, regulations mandate that if you have a wastewater outlet on the beach, you would have to close the beach immediately, but that’s really not possible here. But where should the tourists go?” said Mr Benko.

“We try to bring the information we get from the tourists to the officials. And in the end, it is their job. We are only here to communicate it,” he added.

The original footage of the water being polluted was recorded by the German TV crew in March and was originally scheduled to be broadcast last month, Mr Benko explained.

However, the producers decided to wait to see the response by Phuket authorities before going to air with the footage, he added.

“We will now add this latest footage showing what steps the Phuket authorities are taking, and we plan to broadcast this in an episode in July,” Mr Benko said.