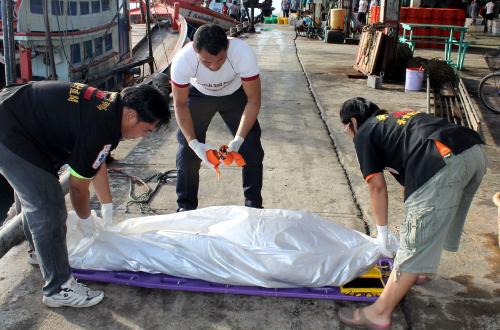 PHUKET: An investigation is underway after a man’s body was found floating at the Yod Duangporn fishing port in Rassada yesterday morning.

The body bore a 10cm wound to the scalp, stretching from the middle of the forehead to the top if the head, said Lt Col Watcharapong Praiphun of the Phuket City police.

“The man was wearing a medallion with Mon writing on it, leading us to believe he was a Myanmar national. We speculate that he worked on a fishing boat, fought with other crew members and was killed and thrown overboard,” Lt Col Watcharapong said.

He was about 165-170cm tall, wearing a white t-shirt and blue shorts with a red stripe down the sides. He had a cellphone in his pocket, he said.

“We questioned area residents but none of them recognized him,” he said.