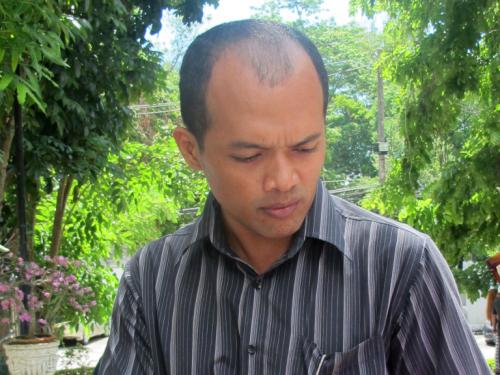 PHUKET: The illegal taxi driver charged with abducting and sexually assaulting a Chinese teen tourist on May 17 (story here) entered a plea of guilty to all charges at Phuket Provincial Court this morning.

Paitoon Kruain, 32, initially told the court he was innocent of the crimes, but changed his plea to guilty after a robust challenge from the judge.

Mr Paitoon first told the judge that his passenger – whom he had picked up at the airport – had tried to open the car door while he was driving. She asked him to stop the car, but he did not, he said.

The judge asked him why he did not stop.

Mr Paitoon responded, “We were in a desolate area and I was worried about her safety.”

The judge then asked, “What was the reason she wanted you to stop the car?”

Mr Paitoon did not answer.

The judge repeated the question, but Mr Paitoon remained silent. The judge could be heard saying to another judge next to him, “There must be some reason she wanted to get out.”

A few minutes later, Mr Paitoon’s lawyer told the judge that Mr Paitoon had changed his plea to guilty to all charges.

In addition to deprivation of liberty and sexual assault, he faces charges of using a Category 1 narcotic and consuming alcohol while driving.

Witness testimony is scheduled to be heard on October 4.