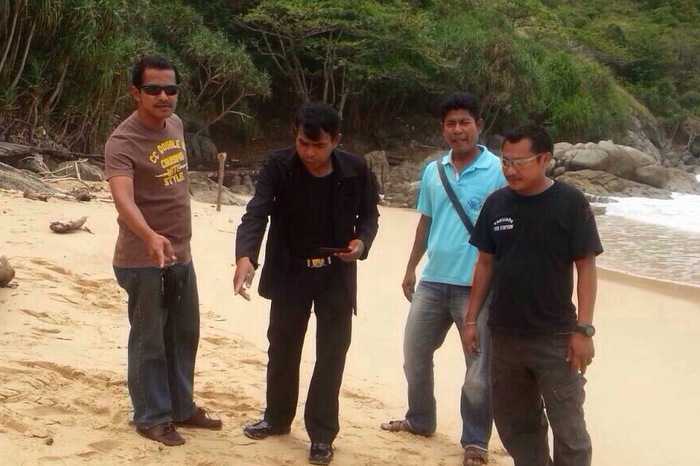 UPDATE: After this initial report was posted online, the Gazette was informed that one of its own editors, Jeremie Schatz, enjoying his time off, discovered the body while surfing with a friend. It was Jeremie and his surfing buddy who pulled the body to shore.

PHUKET: An unidentified body was found floating in the ocean off Phuket’s west coast by a group of jet-skiing tourists this morning.

Chalong Police and officials from Rawai Municipality were called to the scene at Nai Harn Beach after the tourists brought the body back to shore and notified beach lifeguards.

“The man had been wearing a yellow sports jersey and looked to be of Asian descent. He was about 167 centimeters tall and there is a tattoo of the monkey god Hanuman on his back,” Rawai Mayor Aroon Solos told the Phuket Gazette.

No form of identification was found on the body, explained Mr Aroon.

“Police noticed that the man appeared to have been beaten, and it looked like the he had suffered blunt force trauma to the head,” Mr Aroon said.

“Officers believe that the man died before ending up in the water, and that the death occurred less than 24 hours ago.”

Police have begun to check missing persons reports from every police station on the island in the hope of identifying the man as quickly as possible, added Mr Aroon.

Moshe David gets life for Phuket murder of Hungarian businessman