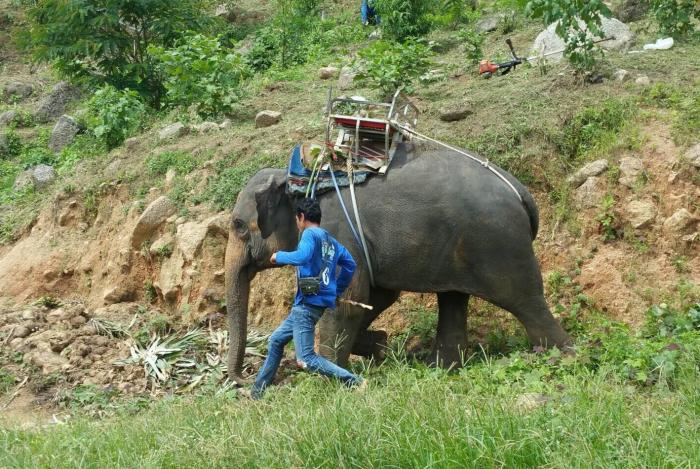 PHUKET: An agitated elephant injured two people and damaged two vehicles while officers were drawing his blood as part of a general health and DNA check on Saturday.

A total of 219 elephants were given blood tests at Nakkerd Hills camps by officers from the Department of National Parks, Wildlife and Plant Conservation (DNP), who are currently investigating elephant trafficking on the island.

A similar incident occurred on Thursday, where an elephant panicked and rammed into a pick-up truck while officers tried to take a sample of his blood for testing (story here).

“We arrived at about 11:30am to find Phuket Safari staff, Rawai officers and tourists in a state of shock,” said Capt Somkiet Sarasit of Chalong Police.

“Staff were trying to withdraw blood from behind the ear of an 8-year-old elephant named ‘Plai Lucky’. His keeper, named Sorapong Chalaemtaisong, 37, was perched on top on him, keeping him calm. However, as soon as Mr Sorapong climbed down to assist the officers with something, Lucky managed to get away.

“At the same time, another elephant walking by saw the needle and became agitated. He bumped into Lucky, who in turn panicked, used his trunk to push officials aside and ran into a pick-up truck and mini-van.”

A woman received injuries on her legs when she ran into a metallic object in the panic that ensued, and a man sustained injuries on his forehead (above the left eye) after being pushed into the van.

“Mr Sorapong attempted to calm Lucky with a banana, but failed. Another staff member, named Chalermwit Siripak, 29, then ran up to him and hopped onto the seat on his back,” said Capt Somkiet.

Luckily, Mr Chalermwit managed to calm Lucky down and no further damages or injuries were caused.

Lucky’s owner paid for hospital expenses, while vehicle damages are being assessed and negotiated with the insurance company.

“The officers have told us that they will look into ‘safer’ methods to perform the tests. They also said it may be better to test for blood in a more suitable environment, without tourists and valuable property nearby,” said Capt Somkiet.

The issue has been set to rest for now, as all blood tests have been completed for the time being.