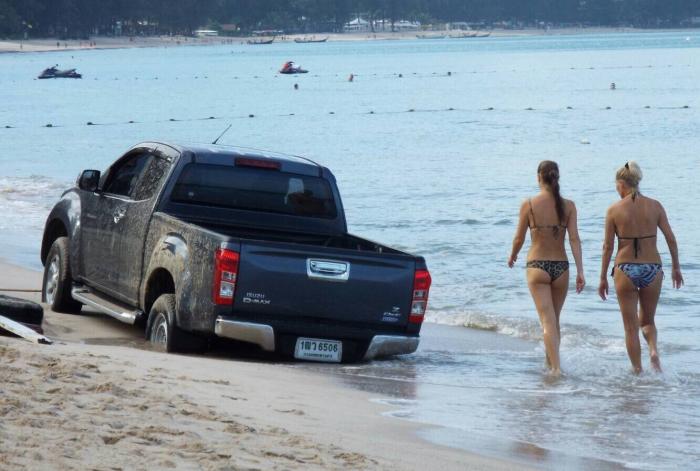 The owner of the Isuzu pick-up, Supot Muthina, 32, reported his predicament to Cherng Talay Police at about 8am. He said that he had gotten drunk about 3am and decided to drive to the beach to listen to some tunes.

Rescue workers, locals and tourists worked together to get the vehicle out of the sand.

“Both rear tires of the truck were stuck in the sand, only a few feet away from the rising tide,” Withawat Kanakup of the Kusoldharm Foundation told the Phuket Gazette.

“It took us seven hours to get it out. We were afraid that when the water level rose, it would simply sink. We had to use another truck to pull the vehicle out.”

A few liter bottles of Thai whiskey, water bottles and snacks lay nearby on the sand.

“I was having drinks with my friends and afterward felt like listening to some music by the beach. I did not expect this to happen at all,” said Mr Supot.

So far, Mr Supot has not been charged for driving under the influence.