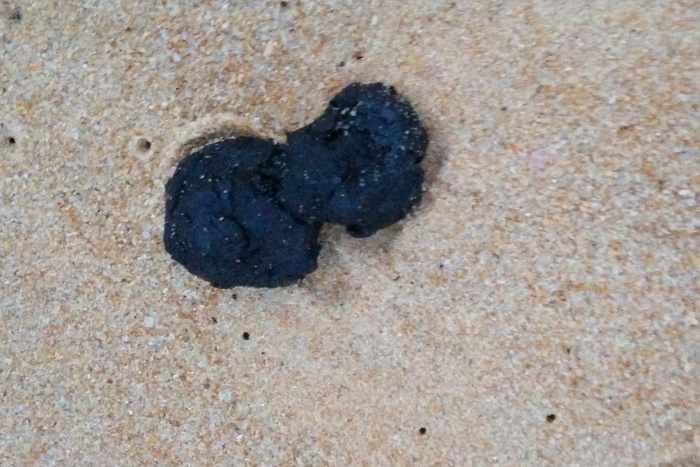 PHUKET: Phuket officials are attempting to establish the origins of a black substance found on Karon Beach by a horrified beachgoer last week.

The investigation follows pictures sent to the Phuket Gazette by a beachgoer who stepped on an unknown black substance while walking on the popular beach.

The beachgoer expressed concern about the possible pollutant and asked for answers from authorities. He said that the substance could be seen along a stretch of sand near the south end of the beach.

“Dozens of pieces were visible on the short stretch of beach where I was walking. I do not know if it went the whole way down to the traffic circle, but I saw the same thing one week ago,” said the beachgoer.

Kata-Karon Mayor Tawee Thongcham told the Gazette that he sent officers out to check the beach for the substance the morning after the first report, but said the officers were unable to find any.

“I sent officers out to investigate, but they did not see anything that fitted the description of the substance described,” he said.

“I go jogging on the beach every day, and have yet to spot it myself.”

Mayor Tawee has urged beachgoers to report to the Kata-Karon Municipality if they encounter any that looks like the mysterious substance.

“Please either call my office [Tel: 076-330186, Monday-Friday 8:30am-4:30pm] and ask for me directly, or safely collect the material from the beach and bring it in to officers there,” said Mayor Tawee.