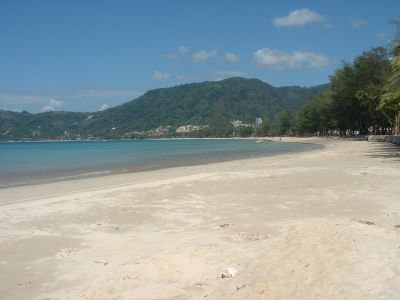 PATONG: Operators of umbrella and beach chair rental businesses on Patong Beach are to ask the government to reconsider its plans for rebuilding the municipality after the December 26 tsunami.

According to the plan, the number of beach umbrealls for rent on the beach would be reduced from 7,000 pre-tsunami to 1,500, and beach chairs and beds would be banned, replaced by plastic mats.

In addition, the beach would be “zoned” with umbrellas allowed only in certain areas.

However, the rental operators say the proposed changes would only add to the losses they have already suffered because of the tsunami.

At a meeting at Patong Municipality Office yesterday, Aumpian Thernthin, the leader of the 55 rental operatives in attendance, asked Patong Mayor Pian Keesin and Phuket Vice-Governor Winai Buapradit for the proposals to be changed.

K. Aumpian said that while renters support the idea of banning building within 20 metres of the high tide level and agree that the beach would be more attractive if the umbrellas and beds were in two rows, they would like the government to alter the plan so it “better reflects the real situation in Patong”.

This would mean increasing the number of beach umbrellas to 2,000 and lifting the zoning restrictions and allowing operators to continue to rent beds and chairs to tourists.

“The tourists will get sand in their faces if they have to lie on the mats stipulated in the plan, so I doubt they would want to rent them,” said K. Aumpian. “Plus, it’s unfair to Patong people, because the beds and chairs would still be allowed at the other beaches, like Kata, Karon and Surin.”

The Vice-Governor argued that a beautiful beach would be the best way to help Patong recover, because it would attract more tourists, but he said he would present the traders’ request to the government before January 20.